EnQlave — the quantum safe for your crypto assets

EnQlave is an education initiative and ecosystem which brings trustless on-chain post-quantum security (the EnQlave wallet) and cross-chain interoperability with QRL (wQRL + DEX) to sufficiently scriptable and supported blockchains, starting with Ethereum.

Quantum computers are heralded as the next big thing in computing, capable of solving complex problems that would take traditional computers too long to crack. This has led to growing concern about how future quantum attacks could steal cryptocurrency by breaking the cryptography. EnQlave is a way for people to secure their assets on second most popular blockchain and learn about this growing threat of quantum computing to the blockchain space in the process.

The EnQlave wallet is completely on-chain on the supported blockchain and does not necessitate the use of QRL mainnet in any form (the movement, purchasing, or selling of any QRL) allowing anyone to create and use EnQlave wallets to secure their Ethereum and Ethereum tokens (ERC20, ERC721, ERC777, and ERC1155). The interoperability component is composed of wrapped QRL (wQRL) on Ethereum, as well as cross-chain swap and DEX functions, allowing for wQRL acquisition and trading on DEX’s such as Uniswap.

We want to encourage anyone who is concerned about quantum security to consider using an EnQlave wallet to protect their assets from quantum adversaries. Bringing this on-chain through smart contracts, rather than securing the blockchain from genesis like with QRL isn’t without its limitations, however.

For those with Ethereum

The threat of quantum attacks against the blockchain is growing greater by the day, and Ethereum is no exception to this worrying trend. Time is running out, and if Ethereum holders fail to protect themselves they risk losing their assets to any malicious person or organization willing to use quantum technology.

For blockchains such as Tezos, EOS, and Stellar which have expressive enough smart contracts, they can reach out to info@theqrl.org and request to bring this functionality to their blockchain project.

Depending on due diligence, the success of EnQlave on Ethereum, the coins demand, and other factors, we’ll look at expanding EnQlave to include that ecosystem.

It’s a tough world out there for cryptocurrency exchanges who want to provide the best possible security but a powerful enough quantum computer could make this a whole different story.

EnQlave is an encryption solution that offers protection from quantum attacks. With the help of EnQlave, exchanges can securely protect user assets from quantum computing by leveraging a unique on-chain self-custody multi-signature process that is more resilient against this emerging technology.

For those with QRL

EnQlave has limitations which QRL does not as it’s a blockchain built from the ground up with post-quantum safe security in mind.

Other benefits for those with QRL:

While we’ll be providing a way for individuals and institutions to secure their Ethereum assets from quantum attacks, there’s a few notable caveats here:

EnQlave — the quantum safe for your crypto assets NEWS AND UPDATES 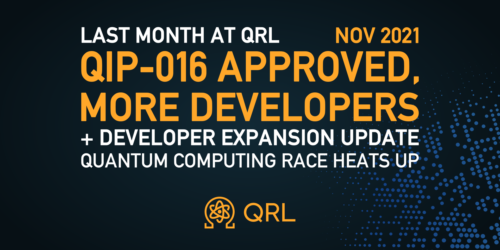 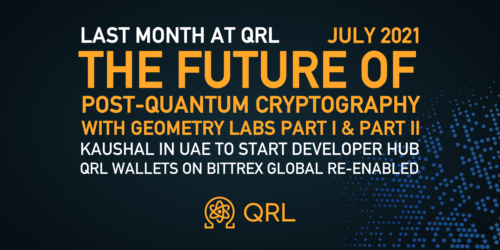 For the month of July, 2021: The future of post-quantum cryptography with Geometry Labs, Kaushal lands in UAE to start developer HUB, QRL Wallets on Bittrex Global re-enabled, and fault-tolerant error correction quantum developments 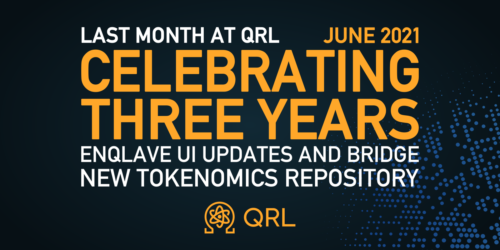