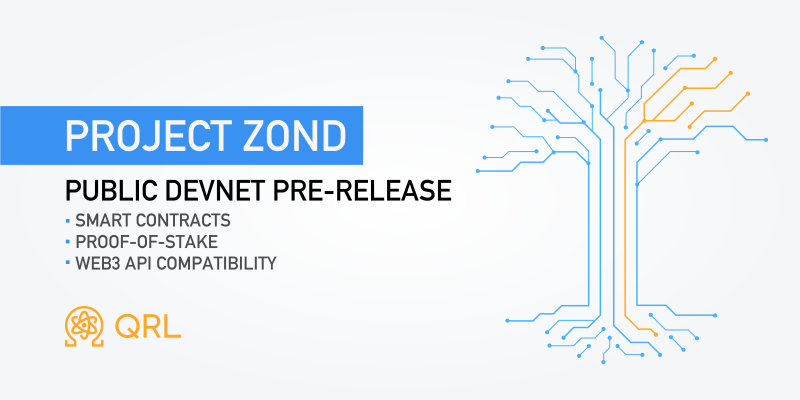 Anyone can run their own Proof-of-Stake node connected to the devnet network, stake, create smart contracts and interact with them.

With the QRL Hackathon 2022 approaching, the Public Devnet of the next iteration of QRL, codenamed Zond, will be revealed. This represents the result of years of iterative research and development to provide efficient post-quantum and Ethereum-compatible Proof-of-Stake and smart contracts to the QRL environment, which can be implemented with small modifications into the majority of web3 ecosystems.

Disclaimer: This is a an early pre-release of a devnet. Expect scattered documentation, bugs, frequent devnet resets, and more.

Over the last week, the team has been hard at work documenting, breaking, and refining Zond.

For those coming from the previous codebase:

For the latest, you’ll want to head over to the Zond docs node installation instructions: https://zond-docs.theqrl.org/node/node-installation

Installation currently consists of pulling from the main zond repo (https://github.com/theQRL/zond), downloading a zond-boostrap.zip file, applying it to various places, modifying a peerList in a config file, compiling, and running the node. The main prerequisite will be golang, of course.

This is mostly automated with zond-init, which is an unofficial init script that does the above steps.

As mentioned, the address format is different, and you can create two different address types, XMSS, and Dilithium, which have identifications in the first byte.

More can be found in our documentation.

Right now, people can use a Dilithium or XMSS Address to transfer or deploy contract or to interact with contract. Staking can only be done with Dilithium at this point, so that’s what we’re going to use.

In the zond directory (~/zond/), you’ll have zond-cli, which you can use to create your address.

This will spit out your Dilithium address and create an unencrypted entry in a wallet.json file from the location the script is run. You can list your addresses with ./zond-cli wallet list.

Get some testnet QRL

You’ll want send a message in Discord with your testnet Dilithium key, who should give you enough testnet QRL to stake and a little to play with. A faucet is coming to help facilitate this.

You’ll want to replace the --to address with the address you’re sending to and nonce for every transaction you send. If you want to use your local node, replace the endpoint of --remote-addr with 127.0.0.1:19009

A minimum of 10000 QRL will be required to stake, which you should have received from someone in Discord. If you haven’t already, be sure to go there and request some!

In order to stake, you’ll need to:

Staking works with some similarity to how it did before, though key differences will be outlined more later through the docs and hackathon.

After that you’ll need to move the dilithium_keys file to ~/.zond/

Then, quit your node with ctrl+c and start it again with ./gzond

To unstake, you’ll want to send a stake transaction with a 0 amount.

Zond comes with EVM smart contract compatibility known as the Quantum Resistant Virtual Machine (QRVM), so any smart contract you’ve created before should work on the Zond devnet pre-release, but with extra security and longevity built in!

For a guide, you’ll want to follow through the web3 smart contract example: https://github.com/theQRL/zond-contract-example

If you’ve ever interacted with Ethereum, you’ll be right at home using our Node APIs.

This is outlined in our Zond documentation with more frequently being added.

Included so far are:

These can be called by curl or any language that can do a post request:

Be sure to join our Discord or join us at our QRL Hackathon 2022 in a few days in Amsterdam!