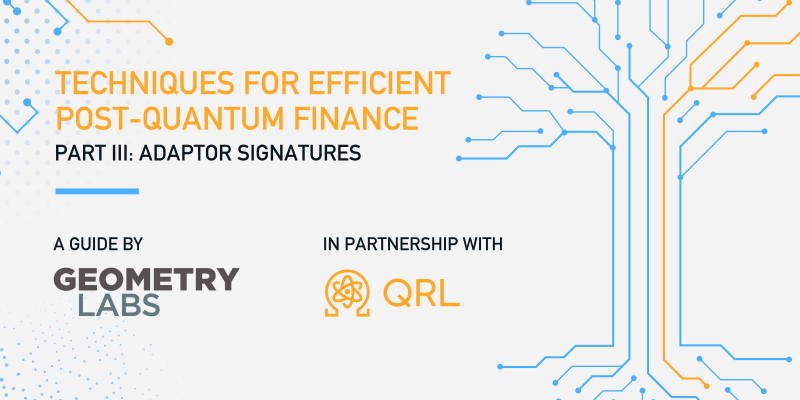 This is the third article in a multipart series from The QRL Foundation and Geometry Labs exploring various methods for constructing scalable post-quantum cryptographic primitives and protocols. In the first article, we describe a lattice-based one-time signature scheme similar to the one published by Lyubashevsky and Micciancio, with some optimizations for key and signature sizes. In the second article, we show how to extend this to Boneh and Kim style signature aggregation, which has several potential applications such as reducing the on-chain footprint for proof-of-stake consensus with many validators, implementing m-of-n multisignature wallets, and on-chain governance. This article describes our novel one-time adaptor signature scheme, designed to enable payment channels and decentralized trustless cross-chain atomic swaps (inspired by the work of Esgin, Ersoy, and Erkin).

The articles in this series describe the applications and security models; additionally, open-source python implementations of the cryptography are freely available via GitHub and PyPI (pip install lattice-cryptography), built with the lattice-algebra library described in a previous QRL blog post.

Note: While some effort has gone into making everything understandable, the intended audience for this article series is systems integrators and students in cryptography. In order to help aid in understanding, we’ve added a further reading and materials section and will have an open AMA form for the duration of this “Techniques for post-quantum finance” series to ask any questions that may arise, both technical and non-technical. These writeups are intended to be informational, and the schemes described for illustration are not formal secure specifications.

Adaptor signatures have applications both for scaling individual ledgers (payment channels) and enabling communication between them (cross-chain swaps).

Payment channels enable off-chain transactions, like Bitcoin’s “lightning network”. One way to think about blockchains is that they provide slow and expensive base layers upon which lighter architecture can be built. Storage and verification are costs paid collectively (every node verifies every transaction and block and signature), so there is a high priority placed upon minimizing the total number of interactions with this expensive base layer. One way users can lighten storage requirements for nodes is to allow users to safely transact via payment channels, only settling to the base layer occasionally.

Cross-chain atomic swaps allow users to trustlessly transact between protocol base layers. We think this interface is compatible with external protocols based on elliptic curve cryptography, meaning it would be possible to execute direct swaps for QRL↔BTC, QRL↔ETH, QRL↔ZEC, etc.

As it turns out, we can accomplish both of these styles of collateralized swap using so-called adaptor signatures, which have also been known as verifiably encrypted signatures.

Adaptor signatures, as described by Esgin, Ersoy, and Erkin in [1], were first proposed for use in MimbleWimble by the (presumably) pseudonymous Tom Elvis Jedusor in the white paper [2], and were fleshed out in the presentations [3] “Scriptless Scripts” by Andrew Poelstra (2017, https://download.wpsoftware.net/bitcoin/wizardry/mw-slides/2017-03-mit-bitcoin-expo/slides.pdf). However, the ideas used in adaptor signatures have an earlier basis, as they have some similarities to the verifiably encrypted signatures from the peer-reviewed [4] (see the white paper [5] for some details). More recently, formalizations have been proposed in the peer-reviewed [1, 6, 7, 8, 9]. Our scheme is not quite in accordance with those definitions, but it is in the same family of protocols.

Crytographic schemes for adaptor signatures have all the functionality of usual digital signature schemes, and an additional feature: an adaptor signature scheme produces not just signatures, but also authenticated commitments called pre-signatures. These pre-signatures commit to secret witnesses, can be verified to have been computed by a signing key, and can be adapted into valid signatures given the secret witness. However, when pre- signatures are adapted, the commitment is opened, revealing the secret witness. In fact, we require as a subscheme a hard relation. Recall that a relation on a pair of sets $S, T$ is a subset of $S \times T$.

The classic adaptor signature use case goes like this. Bob wants a signature $\xi$ corresponding to Alice’s key $vk$ on a message $m$ of his choice posted on a public bulletin board, and Alice wants Bob to give her a secret witness $\underline{w}$ in exchange for a signature. The secret witness $\underline{w}$ is similar to a private key, and it has a corresponding public statement $s = \langle \underline{a}, \underline{w} \rangle$, where $\underline{a}$ is a public Ring Short integer Solution challenge element, specified in the output of the $\text{Setup}$ algorithms above and $\langle \cdot, \cdot \rangle$ is the dot product. To accomplish the swap, Bob uses a secure side-channel to send Alice $m$, $s$, and a proof of knowledge of a witness $\underline{w}$ corresponding to $s$. In response, she uses a secure side-channel to send a pre-signature from Alice, say $\hat{\xi}$. This $\hat{\xi}$ is a commitment from Alice to $s$ with properties similar to a signature. Indeed, $\hat{\xi}$ can be “pre-verified” against the message $m$, the public statement $s$, and Alice’s key $vk$.

Next, Bob adapts the pre-signature to a signature $\xi$ using his secret $\underline{w}$, and Bob can post $\xi$ to the public bulletin board whenever he chooses.

There are some practical considerations for security. If anyone other than Alice and Bob learn of this $\hat{\xi}$ during an intermediate step, then it is possible that Alice could be “scooped” as explained below. Additionally, if Bob posts $\xi$ to the public bulletin board, Alice can download $\xi$ and use it together with the secret $\hat{\xi}$ to extract the secret witness $\underline{w}$.

Note that since the time-lock on Bob’s transaction is short, Alice has time to claim her funds before the time-lock elapses. Considering various outcomes, and the fact that Alice or Bob can unilaterally opt out of completing the exchange, we see that either both parties get what they want, or neither party does. By building refund functionality into the transaction protocol, the users can also guarantee they get their funds back if something goes wrong.

For example, $\underline{w}$ may be a secret witness that plays a dual role, where it is both a bitwise description of a small-norm vector in a Module-SIS setting, and also a pre-image for a hash in a pay-to-hash-pre-image cryptocurrency.

We can employ the anonymous multi-hop lock (AMHL) approach to developing a payment channel network with lattice-based approaches.

Just like a positive cloud-to-ground lightning strike actually sees electrons moving from the ground to the sky, the revelation of secret witnesses proceeds backward from the final recipient to the sending user like a lightning strike.

Correctness merely says that the sub-schemes (the hard relation and the signature scheme) are both correct and if honest parties use the adaptor signature scheme as expected, everything works out. In particular:

So, if a scheme is correct, then honest users can rest assured that their pre-signatures will pass honest pre-verification, and they can be honestly adapted to signatures that pass honest verification, and that valid witnesses can be extracted from such honest signature-pre-signature pairs. The remainder of the security properties ensure that we can relax these notions to not-necessarily-honest constructions.

We note that since this property does not require any oracle access, or multiple keys or signatures, then it applies to the one-time signature environment as well (with one-time keys and one-time witnesses).

We note that since this property does not require any oracle access, or ltiple keys or signatures, then it applies just fine to the one-time signature environment (just so long as we make sure to emphasize that all keys and witnesses are one-time).

We want to ensure that it is not possible for an adversary to publish a valid pre-signature $\hat{\xi}$ and a valid signature $\xi$ on the same data (including the same statement $s$) without giving away a valid (although perhaps relaxed) witness $\underline{w}^\prime$ to $s$. Witness extractability (or weak witness extractability, respectively) is the property that, for a statement $s$ and a valid signature-pre-signature pair $(\xi$ and $\hat{\xi})$ on $s$, the (weak) witness extracted with $\underline{w}^\prime \leftarrow \texttt{Extract}(\hat{\xi}, \xi)$ is valid, even if the signatures were not computed honestly.

We note that since this property does not require any oracle access, or multiple keys or signatures, then it applies to the one-time signature environment as well (with one-time keys and one-time witnesses).

It is necessary that the underlying signature scheme is unforgeable in order for the adaptor scheme to be unforgeable. Indeed, if the underlying signature scheme is unforgeable, then even an algorithm with access to $\texttt{PreSign}$ and $\texttt{Adapt}$ won’t be able to construct a valid signature on a challenge key. However, this alone is not sufficient; in unforgeability definitions, we grant the adversary the benefit of the doubt by allowing this adversary to persuade honest users to publish signatures on messages chosen by the attacker. This is modeled by giving the adversary signature oracle access.

In the one-time signature case, oracle access is limited to one-time access. In the adaptor signature case, we think this means that both oracles should only be queryable once, including the free pre-signature oracle query granted to the adversary.

We note that we can rather easily adapt the previously described one-time lattice-based signature scheme to construct a protocol that is nearly a one-time adaptor signature scheme. The scheme consists of a tuple of the following algorithms.

In this article we explain how our novel adaptor signature scheme can be used to build payment channels (akin to Bitcoin’s “lightning network”) and trustless cross-chain atomic swaps enabling direct trades and decentralized on-ramps such as QRL↔BTC, QRL↔ETH, QRL↔ZEC, etc. We discuss relevant security models and properties such as correctness, witness extractability, and unforgeability.