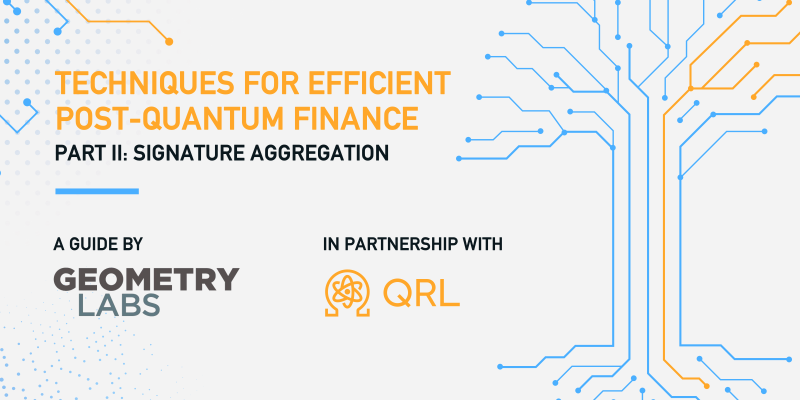 This is the second article in a multipart series from The QRL Foundation and Geometry Labs exploring various methods for constructing scalable post-quantum cryptographic primitives and protocols. In the last article, we describe a lattice-based one-time signature scheme similar to the one published by Lyubashevsky and Micciancio, with some optimizations for key and signature sizes. In this article, we show how to extend this to Boneh and Kim style signature aggregation, which has several potential applications such as reducing the on-chain footprint for proof-of-stake consensus with many validators, implementing m-of-n multisignature wallets, and on-chain governance. The next article describes our novel one-time adaptor signature scheme, designed to enable payment channels and decentralized trustless cross-chain atomic swaps (inspired by the work of Esgin, Ersoy, and Erkin).

The articles in this series describe the applications and security models; additionally, open-source python implementations of the cryptography are freely available via GitHub and PyPI (pip install lattice-cryptography), built with the lattice-algebra library described in a previous QRL blog post.

Note: While some effort has gone into making everything understandable, the intended audience for this article series are systems integrators and students in cryptography. In order to help aid in understanding, we’ve added a further reading and materials section and will have an open AMA form for the duration of this “Techniques for post-quantum finance” series to ask any questions that may arise, both technical and non-technical. These writeups are intended to be informational, and the schemes described for illustration are not formal secure specifications.

Aggregatable signatures have a simple goal: minimize storage requirements for authentication processes by compactly describing several signatures in one verifiable aggregated signature. Before describing aggregation, we recap the general notion of a cryptgraphic signature (as described in the last article).

A digital signature scheme refers to a tuple of algorithms (Setup, Keygen, Sign, Verify) which informally work as follows.

As in the last article, we assume that the message set $M$ is the set of all $k$-length bit strings, $M = \{0,1\}^k$ where $k$ is an (integral valued) function of $\lambda$. Since $\lambda$ and $\rho$ (the input and output of $\texttt{Setup}$, respectively) are shared parameters known by all participants, we will omit them as inputs below for readibility. Moving onto aggregation, our goal is to take a typical signature scheme as a sub-scheme and add support for an $\texttt{Aggregate}$ function and an $\texttt{AggregateVerify}$ function that work roughly as follows.

If aggregation of signatures requires the participation (and secret signing keys) of all the signers in one or more round of interaction, the scheme is called interactive, otherwise it is called non-interactive.

Just like in the previous article, this framework is only secure if both the functions and their parameters are carefully selected. For illustration, suppose $\Xi_{ag} = \{0, 1\}$; with single bit signatures, it would take at most two tries to produce a forgery! Or consider the situation if $\texttt{AggregateVerify}$ was a function that returns $1$ for most combinations of inputs; in this case a signature being ‘valid’ would provide little assurance of security. This leads us extend the discussion to the security properties of aggregate signature schemes.

The definition of existential unforgeability introduced in the previous article does not carry over to aggregate signatures exactly, although with a few modifications, we obtain the following unforgeability game.

This game is summarized in the following diagram. 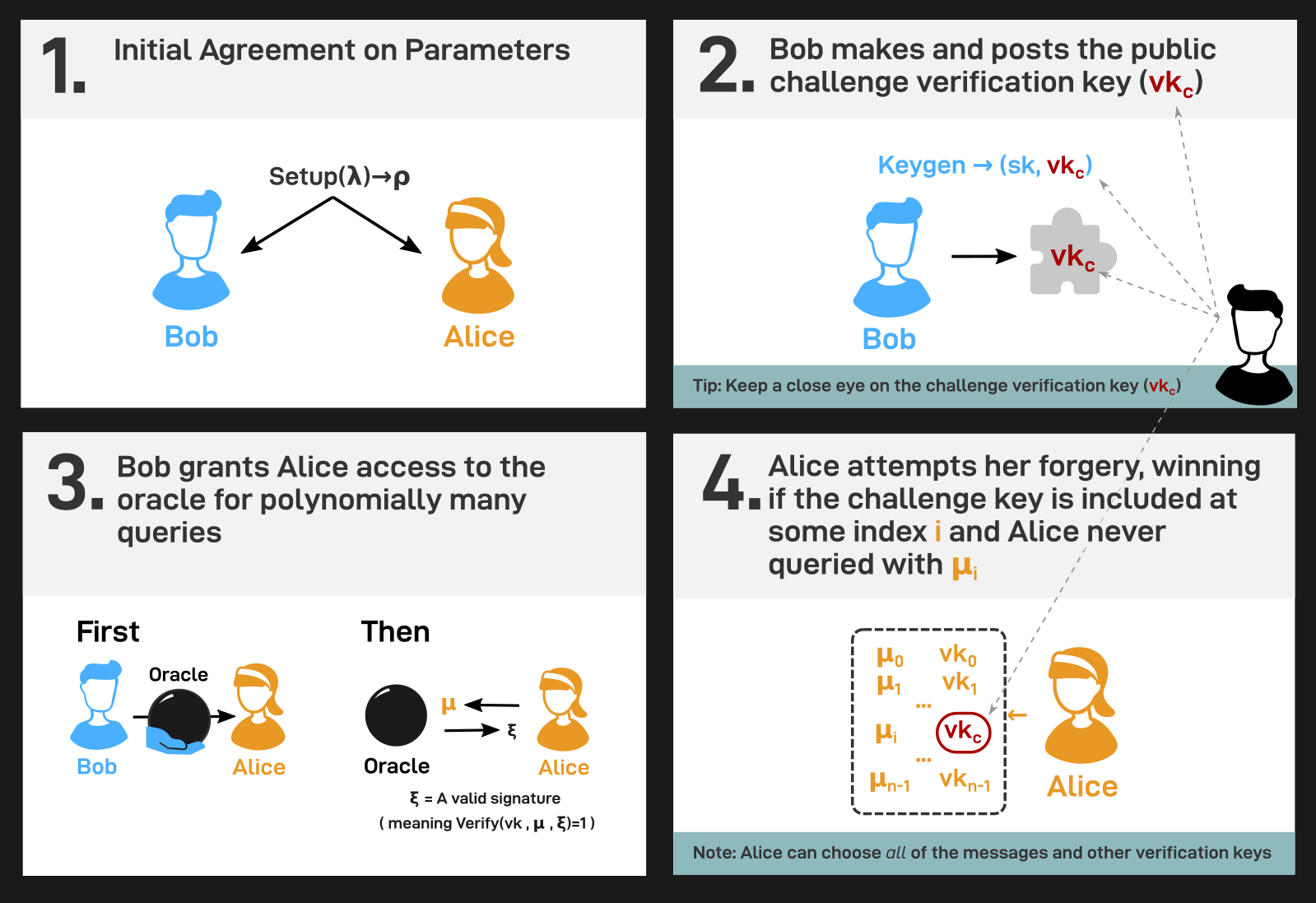 When is Aggregation Advantageous?

Compact Aggregation: To glue or not to glue?

You may have noticed that we can non-interactively aggregate signatuers by merely concatenating (i.e. glueing) them together. In other words, if $\xi_i$ is a purported signature on some message $\mu_i$ under a verification key $vk_i$ for each $i = 0, 1, \ldots, N-1$, then we could define the following.

We note that the size of the aggregate signature is exactly $N$ times the size of an individual signature $\xi_i$. That is to say: $|\xi_{ag}| = O(N)$. This mode of aggregation linear or trivial aggregation, because we can always perform it with any signature scheme.

Assessing the Benefits and Drawbacks

Even if a scheme is a compact aggregatable signature scheme (say with $|\xi_{ag}| = O(lg(N))$), then the actual constants wrapped up in the big O notation here critically determine whether the scheme is actually practical.

For example, in the CRYSTALS-Dilithium signature scheme, which is one of the leading NIST post-quantum standard signature candidates, we see keys at the highest security level that are $2592$ bytes, and signatures that are $4595$ bytes. As a reality check, it is clear that if we have equally sized keys, then just so long as an aggregate of two signatures is smaller than $9190$ bytes, then it is more space efficient to aggregate signatures.

Note that overall evaluation should also take into account time complexity, which is discussed below in the “Verification Overhead” section.

In [1], Lyubashevsky and Micciancio introduced asymptotically efficient lattice-based digital signatures. In [4], Boneh and Kim formalized a one-time, non-interactive aggregatable signature scheme based on these signatures. While comparing one-time signatures to many-time signature schemes is a bit of an apples-to-oranges comparison, we hope the reader is patient with us while we compare fruit.

In [3], we introduced the lattice_algebra package and briefly described how it can be used to concisely implement this sort of scheme. The primary variation comes from tracking not only the infinity norm of secret signing key vectors, but also their Hamming weights.

We note that the security analysis in the paper [4] is rather pessimistic, and by tracking not only the infinity norm of secret vectors but also their Hamming weight, we may more tightly relate the norm of a linear combination of vectors or polynomials to the norms of its inputs and coefficients. We may also more tightly relate the two-norm with the infinity norm. This improved tightness in security inequalities expresses itself as smaller keys and signatures.

Verification Overhead for the BKLM Approach in a Lattice Setting

One practical consideration to note is that verifiers must compute the aggregation coefficients and transform them all with the ’number theoretic transform’ in order to verify a signature. The number theoretic transform takes time $O(d \cdot lg(d))$ to compute, so to compute one of these for each aggregation coefficient is $O(N \cdot d \cdot lg(d))$ computation time.

In particular, the methods of the BKLM scheme take at least $O(N \cdot d \cdot lg(d))$ additional verification time compared to linearly aggregated/stacked usual digital signatures, which has greater memory/space requirements than verifying individual digital signatures in series. Thus for a given application, the space and time tradeoffs must be carefully considered when assessing the utility of aggregation.

This article explored methods for sublinearly aggregating signatures, in the style of Boneh and Kim. We presented this idea from the perspective of extending a usual digital signature scheme to an aggregatable one. We noted that one can always trivially aggregate signatures by merely stacking them, which provides a baseline point of reference for assessing when signature aggregation is useful. We provided some back-of-the-napkin computations to ascertain the conditions and algebraic constraints under which signature aggregation is more efficient than stacking. The next article describes our novel one-time adaptor signature scheme, designed to enable payment channels and decentralized trustless cross-chain atomic swaps.