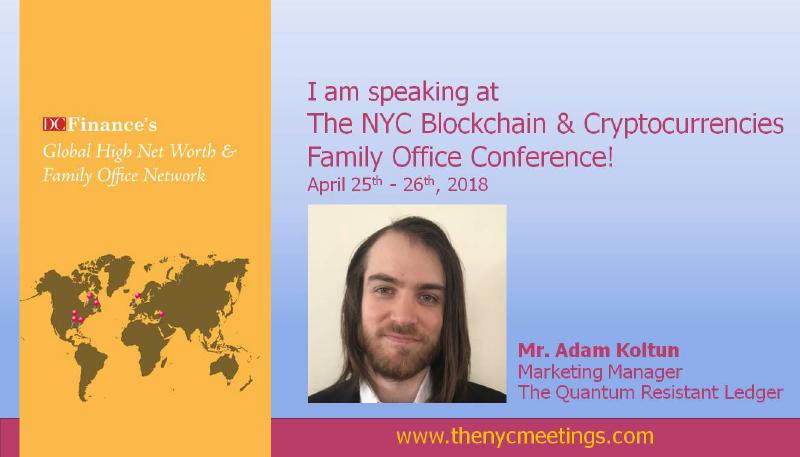 This week I had the opportunity to fly to New York City and present at DC Finance’s NYC Blockchain & Cryptocurrencies Family Office Conference. Held at Reed Smith LLP in downtown Manhattan, the event was an intimate gathering of Family Office managers and other affiliated individuals, who saw presentations from projects both directly in the cryptocurrency space, as well as more adjacent to it. This included groups like Ledger, Aurora, and The Institute for Blockchain Studies, among others.

QRL was first approached by DC Finance to participate (and ultimately, present) at the conference months ago, and between when we were approached and when the event occurred, the size and scope of the event itself had increased considerably. Given that we are a tech-first project, catching the eye of an organization as serious about investment and financial management as DCF was greatly vindicating for our promotional strategies thus far. Looking around the room, it was clear that there was a marked absence of projects promising the world — everyone assembled had a clear vision, and was at some stage of materially pursuing that vision. Moving forward in the industry, I would imagine this will increasingly be the case. Put simply, Hot air can take you far, but a solid foundation will take your farther — the fundamentals are ultimately what will win out over time.

My presentation was titled, “Hedging against the Black Swan: How to make your portfolio Quantum Resistant” and like most of the talks of the day was focused on a particular aspect of the industry (in my case, Quantum Resistance and the potential for a Black Swan event coming from Quantum Computers). This was the most directly investment-related presentation I have given yet to date, and it was refreshing in some ways to be able to address some of the market concerns surrounding the industry in general, and quantum resistance in particular, directly, as opposed to having to talk around the edges of the topic.

While I was ostensibly there to present, I never like to attend any sort of gathering without learning something. I was most interested in learning what the personal opinions of various Family Office managers were in relation to cryptocurrency. Obviously they did not all agree or have the exact same perspective, but a few themes emerged:

While many in the cryptocurrency space seem to perceive Family Offices as the vanguard of V.C. investment (which is partially true), what some fail to notice is that, historically, this has been the case not by coincidence, but rather because industries have made meaningful efforts to reach out and educate Family Office principals. Absent those efforts, Family Offices will continue to only dip a toe in around the edges of the industry without having the confidence to jump in with both feet.

The DC Finance event was wholly unlike any of the other conferences or expos that I have attended so far in this space, and it was an unparalleled opportunity to present to people that are not usually present at the typical cryptocurrency event. I am thoroughly grateful to DC Finance for inviting me, as it was both a pleasant and educational experience.

What To Look Out For