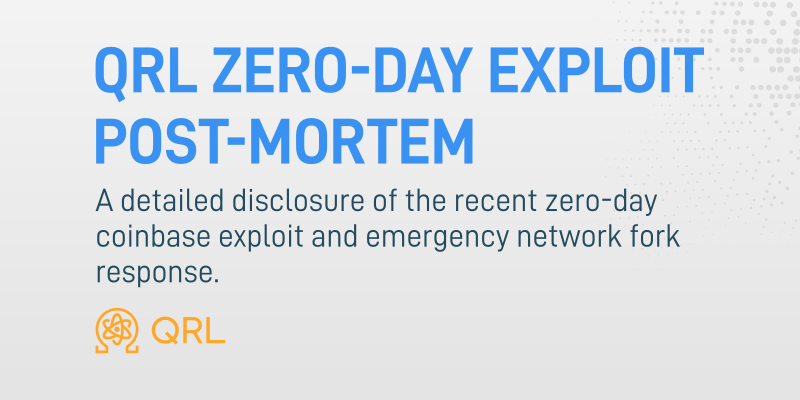 On 06/02/2022 the QRL network suffered a sophisticated zero-day attack by an adversary using a malformed block containing a second coinbase reward of 25M QRL. This blog will explain in detail how this exploit occurred and how the team and community responded to the QRL’s equivalent of the Bitcoin overflow bug.

The QRL network is powered by nodes executing fully open source software and every function down to a single line of code is visible for all to inspect and collaborate upon. At the time of writing, 58 developers have made 12518 contributions to the core QRL project so far. Security by obscurity is not a concept the open source community supports. QRL was created with a completely new codebase, and given it is a live financial network this was fully commercially audited prior to mainnet release. Being open source means many eyes have examined our codebase and the project has fixed a number of bugs previously (including one critical severity node exploit) prior to their discovery by an adversary.

The nature of development is one of iterative improvement and code hardening - no codebase is perfect or free from attack vectors. As the project gains momentum and grows it should be expected that further attempts to attack or exploit the network should be anticipated and we must as a development team and community remain vigilant.

The attacker successfully mines block 2078158 and it is accepted by the network on June 2nd 1047 UTC. This block is unlike any other since or before as it has a second coinbase transaction contained within it.

For a node to accept a newly mined block it must be valid. To pass block validation each node performs a series of verification tests on the block and contents to confirm correctness. It must build upon the previous block successfully. The state must be absolutely correct. The block header calculations must be correct. The block reward in the coinbase transaction must calculated correctly and the coinbase transaction must have the correct nonce for the block number.

All transactions in the block must contain a valid XMSS signature and pass state checks successfully.

The attacker realised that whilst the above is true, that there was a subtle oversight in the core block validation code. Where the coinbase transaction is validated for correctness, this took place under the assumption it was always the first transaction in the block. 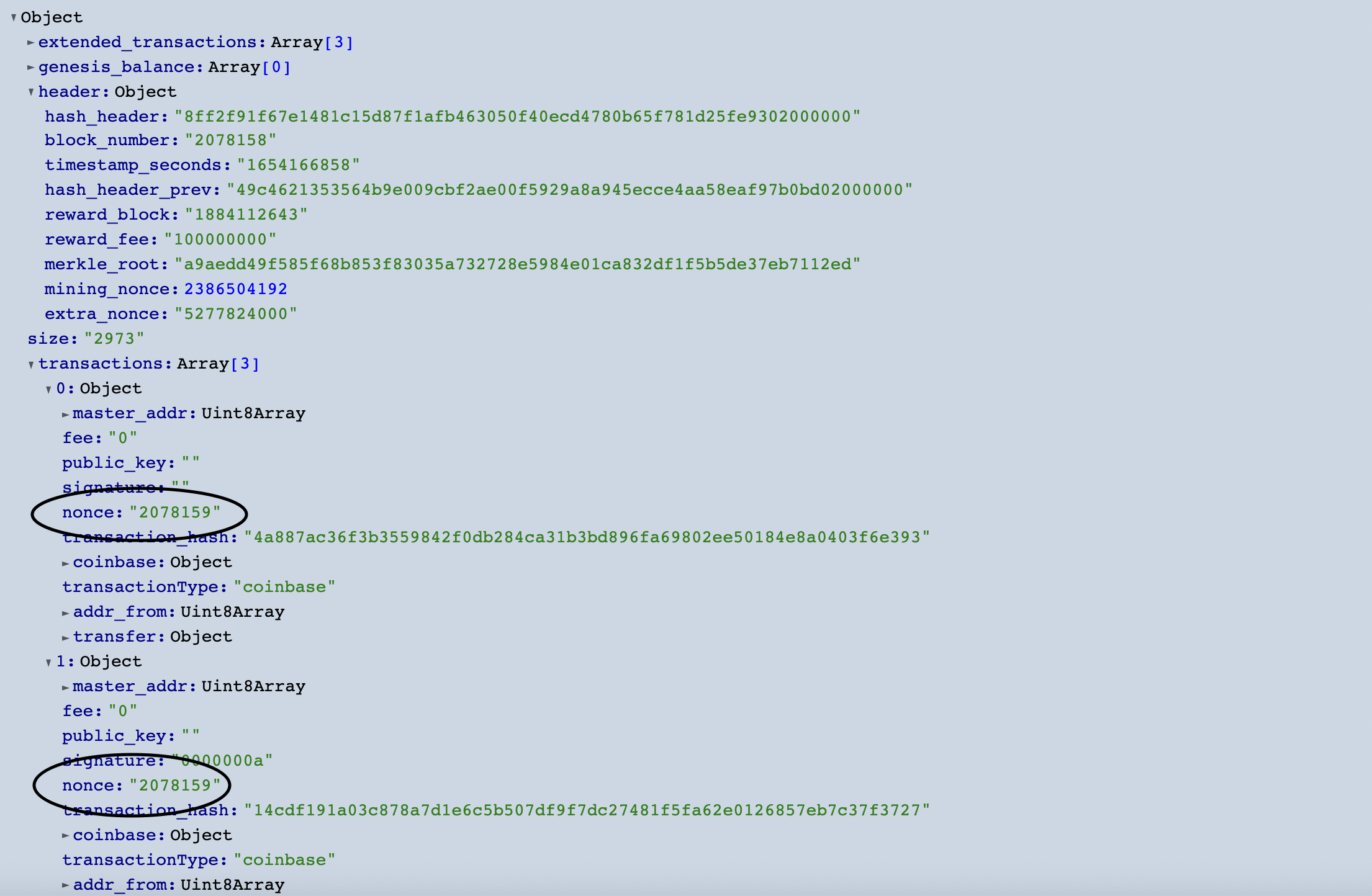 The attacker took advantage of that vulnerability to drain 25M quanta from the source address.

A detailed event timeline can be found at the end of the blog.

On June 2nd 1653 UTC, a member of the core team was alerted to block 2078158 by a community member. At 1707 UTC, after a preliminary investigation, a zero-day exploit was declared internally by the core team. Following responsible disclosure by 1717 UTC, exchanges had been notified to halt deposits and withdrawals.

At 1808 UTC, the core development team had reproduced the exploit and by 1811 UTC, a potential code fix identified. Social media and all known public QRL discussion fora were then monitored for any discussion of the coinbase exploit ‘in the wild’. Several ‘all hands’ teams meetings took place to brainstorm the least worst path forward. A decision was taken to keep the exploit private for as long as possible until the attacker’s funds were frozen and the vulnerability closed. By 0036 UTC the network was secure and an emergency node upgrade recommendation was made to miners at 0220 UTC, immediately after a new QRL node version was merged on github.

This public action alerted the attacker who then made a failed attempt to move 1.88M quanta immediately to another address. Coincidentally at almost exactly the same time discussion of a possible exploit surfaced in discord. Over the following hours major mining pools and users upgraded to QRL node 4.0.0 and the crisis passed. The attacker made contact on discord with the community and then later with the team directly via an email exchange (security@theqrl.org) where proof of control of the attacker address was disclosed.

In total, 322.9 quanta were lost to the attacker via deposits on Cointiger.

After identifying the vulnerability, it was relatively straightforward to write a code patch to prevent the exploit from occurring again.

To correct the critical vulnerability a simple block validation check was added to confirm there is only a single authenticcoinbase transaction present in the block.

Next came a discussion within the team about how to rectify the damage to the ledger and network - at this stage the attacker still had means to repeat the exploit and mint new fraudulent blocks and move 25M quanta at will. One possibility included halting the chain and rolling back to block 2078157 to erase the attacker block entirely then formally restarting the chain with all nodes using a new QRL node release. This was ultimately decided against as the attack block 2079158 was already buried hundreds of blocks deep from current blockheight at the time of discovery. Whilst no user transactions would have been lost or at risk (they would simply have re-entered the network memory pool and been reconfirmed in a different block upon chain restart), halting the chain seemed more damaging than the approach taken and raised the possibility of miner OTS reuse.

Instead, a different approach was taken which allowed the chain to run uninterrupted and prevented the attacker either moving funds or creating further attack blocks whilst the community and mining pools answered a clarion call to perform an emergency node upgrade.

In communication with trusted community members the team spun up a new mining node and pool using an as yet non-public QRL node patched to reject blocks containing the coinbase transaction exploit, but also with a new state update which explicitly reduced the attackers QRL address Q010600fcd0db869d2e1b17b452bdf9848f6fe8c74ee5b8f935408cc558c601fb69eb553fa916a1 balance to 0, and restored all but 322.9 quanta of the 25M to the source address. Sufficient hashpower was deployed to ensure that for a few hours the new mining pool would prevent any coinbase attack block from another miner or a block containing transactions from the attacker’s QRL address from persisting in a winning fork. Around this time discord members became aware of a large jump in hashpower backing the network and it was incorrectly theorised the QRL was under a malicious 51% attack - actually the network was being salvaged from a serious ongoing attack earlier in the day.

A new qrl node version release v4.0.0 was then released publicly via github and community members and miners were urged to upgrade. This latest release automatically disconnected older versions from the network at blockheight 2081680, which was 2880 blocks after the latest fork update. Once published the attacker resurfaced and immediately attempted to move 1.88M quanta to Q010600d1a7f0e79d1b9db38f501b79c16cbb91c7cdb50ff9e3c4ace38137d1690cbd6b12313f35. This transaction failed to confirm on the main chain and was eventually dropped from the network memory pool. As blockheight 2081680 was reached the core team finally considered the coinbase exploit attack vector neutralised.

It was a humbling experience after 4 years without any major public exploit to suddenly be forced to respond to an existential vulnerability. As a team we worked well under immense pressure and time constraints to formulate and execute a response plan successfully. A highly responsive and engaged mining community and community members helped the emergency upgrade of the network to succeed.

It is worth pointing out that further delay in identification of the exploit or an earlier attempt to move significant funds by the attacker could have lead to a far worse outcome. We are most grateful to JohnTitor for his thoughtful report to the core team.

To better prepare for future eventualities, the team has extended our devops process to include realtime monitoring of unusual network behaviour (penned the ‘blockwatcher’ internally). Funds were lost in this episode (approximately 65 USD worth of quanta). As a team, we firmly believe in responsible disclosure of software vulnerabilities and will continue to collaborate with security professionals, while adhering to responsible, established white-hat disclosure principles. The proper email address to submit security vulnerabilities is security@theqrl.org [PGP/GPG]. 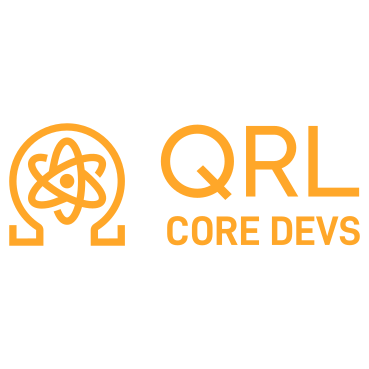