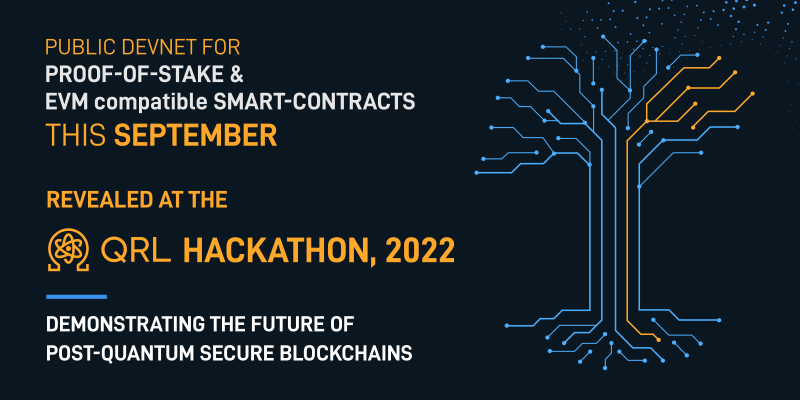 The team at QRL is delighted to announce the ‘Build on QRL Protocol’ hackathon event planned for September 2022. At this event, the latest network upgrade will be revealed - public devnet POS and EVM-compatible smart contract functionality.

Finally, developers and the community will be able to build and use exciting web3 functionality within the QRL protocol.

The future of post-quantum resistant blockchains

As quantum computers scale, post-quantum cryptographic protocols must be implemented on public blockchains to ensure the security of transactions from quantum theft - not just now but to last for the coming decades.

Since our genesis block two million blocks ago, the QRL blockchain has performed uninterrupted. Using NIST-approved cryptography to secure payments and communication, our chain is always available, open sourced, and fully decentralised. Looking to the future, simply being a reliable completely post-quantum secure means of exchange isn’t enough within the plurality of the current public blockchain ecosystem.

After years of research, development, and protocol iterations, we are extremely excited to see what novel decentralised systems and applications will be built on the QRL protocol by… you!

With the public devnet for our Proof-of-Stake consensus and EVM smart contracts coming this September we’ll be spearheading an in-person hackathon to build out the QRL ecosystem to be ready for release.

This is a chance for developers, designers, both professional and amateur, or anyone in-between to come together for a multiday event with direct team interaction and to be part of the future of post-quantum resistant blockchain ecosystems.

Building and/or porting Web3 applications, gaming NFT creation, decentralized exchanges, or establishing DAO & Governance on the QRL network, are all potential avenues for projects as part of this hackathon.

Full details and agenda will be released when things are more solidified, but the hackathon will be taking place in September and include everything from panels to announcing funding for projects building on the QRL protocol.

Western Europe was selected as the location, but we would like more consensus on where the event will be held and the communities input is appreciated!

This event is open to everyone, but we are particularly eager to meet a lot of our amazing community and contributors. Watch for a future Twitter post in which we will poll the potential venues below!

Amsterdam is the business and financial capital of the Netherlands. It offers a diverse range of industries, including finance, technology, creative industries, and healthcare. The city has the largest port in Europe with the world’s largest container port.

The Dutch economy is great for business because it has a high GDP per capita and low unemployment rate, and is one of the top European cities in which to locate international business. This makes it home to many multinationals such as Unilever, Heineken, Philips, ING Group, KLM Royal Dutch Airlines and TNT Express Worldwide.

Fun fact: Amsterdam has 165 canals, which is in total more than 100 kilometres.

Berlin is the fastest growing foreign startup hub in Europe. A lot of people are now moving to Berlin to take advantage of the startup opportunities in the city. The low cost of living and high quality of life make Berlin an attractive place for people who want to start their own business. In 2015, Berlin generated the most venture capital for young startup companies in Europe.

The Science and Business Park in Adlershof is the largest technology park in Germany measured by revenue. It is a hub for research, development, and innovation with a mix of companies from both the public and private sectors. The park was founded in 1990 as an initiative of the Free State of Berlin and has since become one of the most important locations for research and development in Europe. This includes a number of leading universities and research institutes such as the Fraunhofer Society, Max Planck Society, Leibniz Association, Helmholtz Association, Fraunhofer-Gesellschaft.

Zurich is known as the financial and banking capital of Switzerland. It has the largest number of banks per capita in the world making it a global financial hub including a large number of international banks, such as UBS and Credit Suisse. Zurich was ranked as the most competitive city in the world by the Economist Intelligence Unit in 2017. Many universities and institutes such as the Swiss Federal Institute of Technology have contributed to Zurich’s reputation as one of Europe’s leading centers of education, science, technology, health care and culture.

Fun fact: voted one of the Happiest cities in the world