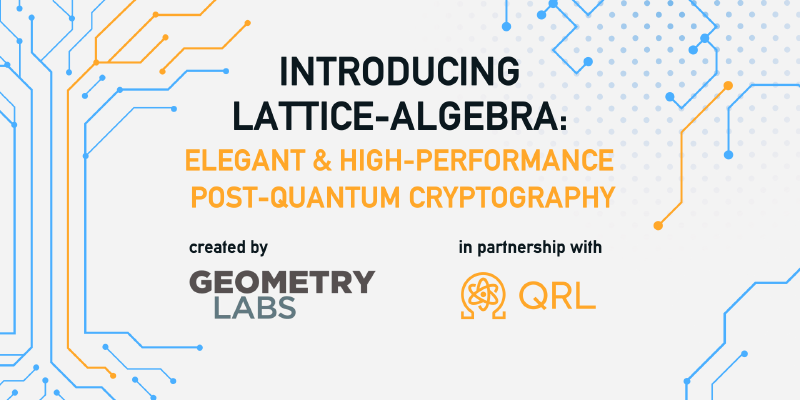 We are excited to announce the public release of our python implementation of some of the algebra underlying lattice-based post-quantum cryptography. In partnership with The QRL Foundation and created by Geometry Labs, the code is now available as free and open source software published on GitHub and distributed through PyPi (install with: pip install lattice-algebra). This library will be used to prototype a variety of new features for the QRL protocol, such as lattice-based proof-of-stake signatures, trustless cross-chain atomic swaps (QRL↔BTC, QRL↔ETH, etc), and ‘lightning network’ style payment channels.

The mathematical objects and calculations handled by this package are foundational for lattice algebra, with a variety of applications ranging from signature aggregation to zero-knowledge proofs. The module highly prioritizes developer experience for researchers and engineers, by allowing them to work with a few high level objects (e.g. polynomials, polynomial vectors) that contain built-in methods to abstractly handle the ways that they interact with each other. The goal is to lower the barrier for creating lattice cryptography primitives and applications by allowing the developers to focus on securely building the higher-level constructs without having to worry about implementing the underlying algebra as well.

The module is specifically designed for building cryptographic schemes in the Ring/Module/Ideal Short Integer Solution setting with secrets uniformly distributed with respect to the infinity-norm and one-norm; it can also be used to implement schemes in the Ring/Module/Ideal Learning With Errors setting. The library’s lead author Brandon Goodell explained how the high level objects are efficiently implemented under the hood, “to manipulate equations of polynomials, we carry out the computations with vectors and matrices, with highly optimized algebraic operations.”

For certain choices of d, q, and l, it is thought to be hard to find any vector (or matrix) x that is small enough (in terms of one or more norms on the ring R) such that some matrix equation A * x = 0 is satisfied, where A is a suitably random challenge from V. From this hardness assumption, the map carrying suitably small vectors (or matrices) x to their images A * x is a one-way function. Simulation-based security proofs in the lattice setting are based on extracting a suitably small vector or matrix (called a witness) that satisfies some system of linear equations. Overall security of the scheme is based on how small the adversary can make this witness in terms of the norm of the witness.

Nothing in lattice-algebra limits which hardness assumptions are underlying the cryptographic scheme being constructed. Since the library merely handles polynomials from R and vectors from V=R^l, schemes based on other hardness assumptions (such as the Ring Learning With Errors assumption) that take place over the same ring can be securely implemented as well.

The library is designed to make it easy for developers to write clean code that securely implements lattice-based cryptography for protocols and applications. The package is optimized to use the Number Theoretic Transform (NTT) to multiply polynomials in time O(2dlog(2d)), and uses constant-time modular arithmetic to avoid timing attacks. For convenience, we included tools for both hashing to and sampling from these “suitably small” polynomials and vectors. Both the hashing and sampling are carried out such that the bias of the resulting distribution is negligibly different from uniform.

One way that the lattice-algebra toolkit helps developers write succinct code is by leveraging python’s magic methods for arithmetic with elements from R and R^l. For example, suppose we have two polynomials f and g. Simple expressions such as f + g, f - g, and f * g carry out constant-time polynomial arithmetic such as addition, subtraction, and multiplication (respectively). Likewise if we have two vectors of polynomials x and y, several vector arithmetic methods are at our disposal: we can add them like x + y, or calculate the dot product as x * y. Additionally, x ** f scales a vector x by the polynomial f, which is useful for constructing digital signatures.

Here is how the process is described in the Boneh and Kim write up:

With proper parameters and key structure, we can implement a functioning “arithmetic-y” version of sign simply by transcribing the above blue boxes:

The ability to write such minimalist code limits the room for implementation errors and allows cryptography developers (and their code reviewers) to focus on the application or protocol itself.

Future work on the lattice-algebra package includes non-uniform key sampling, expanded linear algebra, and additional benchmarking tests. We will shortly be publishing articles with free open-source code for several cryptographic applications, including aggregatable signatures and adaptor signatures (which will be used to prototype the logic enabling cross-chain atomic swaps and ‘lightning network’ style payment channels for the QRL protocol).