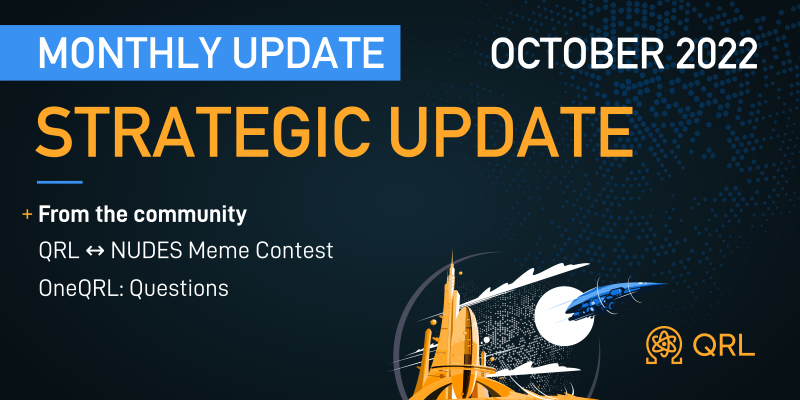 Strategic update: The Sleeper Must Awaken

Today, crypto is so much more than just a peer-to-peer value transfer, with DeFi, NFTs, DAO’s, DEX’s and more coming into the space over the last few years. The market capitalization has exploded and blockchain technology is on the verge of entering the mainstream.

QRL, being well into its 7th year of existence, is changing with that, introducing smart-contracts for programmable assets, and Proof-of-Stake as a more efficient and robust consensus mechanism.

Important changes to project governance and funding will soon be announced. The first step of this will be a public grants system aimed at supporting: core development, research, education and documentation and for the first time, community.

More can be read in our Sleeper Must Awaken blog.

At QRL’s first ever in-person Hackathon, which took place in Amsterdam in September of this year, some really impressive projects were developed, which we’ve given an overview of on youtube.

The QRL ↔ NUDES communities joined forces and launched a meme contest October 11th 10:00 AM UTC to October 31st 10:00 AM UTC with over $5000 in prizes and the winners have been announced!

AND THE WINNING MEMES ARE:

1st place - $1,200 in QRL tokens
QRL will change your life, by kurubatermit

4th place - $300 in QRL tokens
QRL - ENTANGLE ME, by cuetum_
(Since cuetum_ is a Nudes General, his prize is donated to the Excellence Awards prize pool)

Excellence Awards
For this contest we had the QRL community team and Nudes Army OGs pick their favorite memes to win Excellence Awards! $2,300 in QRL and 250 Billion NUDES will be divided equally among winning memes.

To see more QRL meme’s, you’ll want to check out the contest page.

Since the launch of OneQRL.com at the 2022 Hackathon, the OneQRL Team intentionally left the FAQ section unfinished.

Last month, the OneQRL Team got the community involved and gave a 10 Quanta reward to the most voted Questions/Answers each. This event lasted from October 24th to October 31st

On 2022-10-22: SandboxAQ acquires Cryptosense to enhance cybersecurity and encryption capabilities of its post-quantum cryptography solution. Financial details remained undisclosed. Amadeus Capital Partners led a $4.8 million round of funding, bringing total funding to $5.6 million. SandboxAQ has been selected by the U.S. National Institute of Standards and Technology as one of twelve collaborators for the National Cybersecurity Center of Excellence.

The company's board includes Eric Schmidt, who served as Google's CEO and chairman from 2001 to 2011. Cryptosense is now moving under the U.S. SandboxAQ said this acquisition will leverage a natural complementary and help realize synergies. "Building the Cryptosense organically would take more time, and it is critical to get this important technology in use fast". - eetimes

On 2022-10-03: Quantum computing company Quantinuum made three more announcements at IEEE Quantum Week 2022. Announcements include another quantum volume record, a new method to make two-qubit gates with higher fidelity and greater efficiency, and a milestone achievement of more than a half-million downloads of its software.

17 other significant improvements over the last 12 months are:

Cloudflares post-quantum cryptography protects almost a fifth of the internet

On 2022-10-03: Cloudflare has launched post-quantum cryptography support for all websites and APIs served through its network. This will introduce quantum computer-proof encryption for all sites using Cloudflare, which accounts for 19.1% of all websites according to W3Techs. Researchers estimate the market for such solutions will be worth $476.8 million by 2030.

Cloudflare isn't the only CDN provider looking to secure the Internet from quantum computing threats. Other vendors like PQShield, which announced raising $20 million in funding earlier this year, are leveraging post-quantum cryptography to enable enterprises to develop secure cryptographic solutions for messaging platforms, apps and mobile technologies. - venturebeat

New blog: The Sleeper Must Awaken