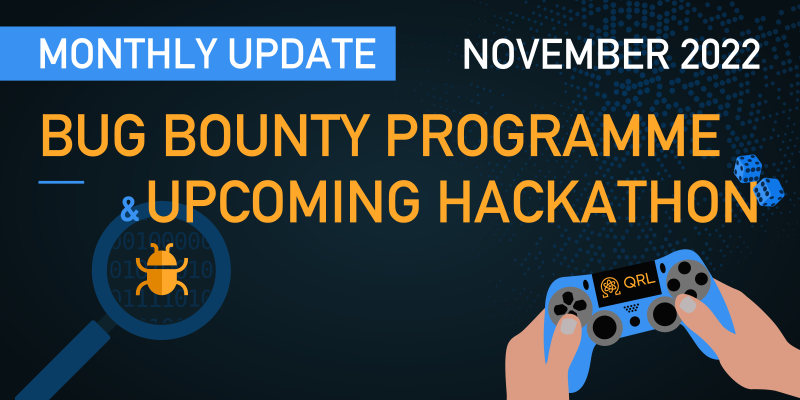 The QRL Foundation is excited to launch the QRL Bug Bounty Programme, an experimental and discretionary rewards programme designed for our active community that aims to encourage and reward platform improvements. This will build upon the work of third-party auditors by offering rewards to individuals who work as white-hat security researchers. These individuals often have the same level of knowledge and approach to solving problems as hackers.

The QRL Bug Bounty Programme offers increased vulnerability detection and realistic threat simulation on a continuous basis in addition to the depth of third-party audits that are performed.

It gave us great pleasure to announce the forthcoming QRL Games - Winter Hackathon 2022.

The success of our QRL Hackathon 2022 in Amsterdam, during which we unveiled our public devnet equipped with Proof-of-Stake (PoS) and EVM-compatible smart contract functionality, serves as the foundation for this development.

The primary focus of this hackathon is, as may be inferred from the event’s name, on games. It doesn’t matter what it is as long as it has to do with QRL and games, which might mean anything from making a QRL game to gamifying any component of the project.

This is the perfect opportunity to work together and rack up some Quanta (QRL) in the process!

The QRL Games - Winter Hackathon 2022 event will begin shortly on Wednesday, December 14th, and will continue until Wednesday, January 4th, 2023, which is just a few days after the New Year.

More information can be found on the QRL Games - Winter Hackathon 2022 events page.

Be sure to check out our events page from time to time for new events. Want to run your own community event? Get in touch!

The public devnet of project Zond has been successfully running for over 2 1/2 months and has surpassed a block height of 100,000! This is a testament to the quality of work our lead core blockchain developer Kaushal Kumar Singh and two golang devs have put into the next major milestone of QRL.

If you’re interested in joining us to test, you can do so by installing a Zond public devnet node. From there you can create smart contracts, stake, and send transactions using CRYSTALS-Dilithium 5 and XMSS. A quantum computer has simulated a wormhole for the first time

On 2022-11-30: A quantum computer has been used to simulate a holographic wormhole for the first time. The simulation used only nine quantum bits, or qubits, so it was very low-resolution.

Using a more powerful quantum computer could help bring the image into focus. That is crucial because some theories of quantum gravity are difficult or even impossible to completely understand using only classical computing. - newscientist

On 2022-11-17: A quantum computer has run the largest quantum program yet. The computer made errors, but a mathematical method was able to extract a meaningful result anyway. This error-mitigation technique could help quantum computers become more useful than their imperfect hardware would otherwise allow them to be. IBM's quantum computer had qubits made from tiny wires that conduct electricity perfectly. Superconducting qubits are typically programmed by being hit with pulses of microwaves, so running the new program was equivalent to programming a microwave pulse sequence.