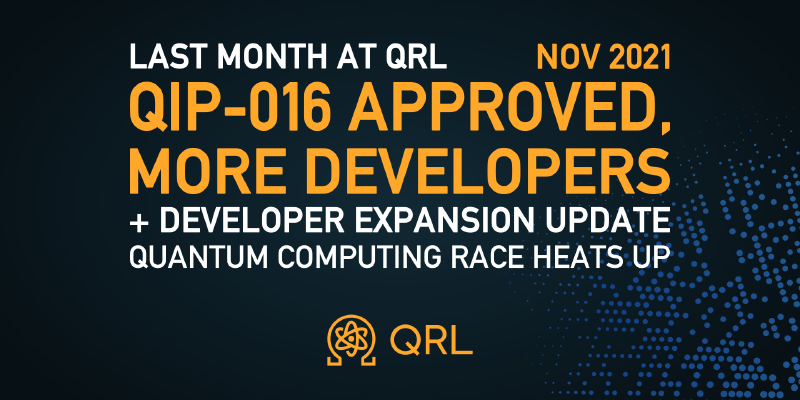 As the crypto asset space grows into a multi-trillion dollar market, it is worth considering that the vast majority of that market cap still remains painfully vulnerable to quantum theft. The financial stakes have never been higher and our mission to provide a fully post-quantum blockchain ecosystem has never been more important than it is today - especially as crypto seems ready to burst into the mainstream around the world.

Remote team working is difficult and so I was very pleased to recently travel to finally meet with Kaushal who has been overseeing our recruitment round in the UAE. I am thrilled to report we are onboarding several excellent core developer candidates into the team after a lengthy selection process - more details on this to follow.

Swelling the core development team is absolutely critical to accelerate node development and the planned STARK powered PoS hardfork timeline. This incredible cryptographic construction is worthy of a blog post in itself as it enables post-quantum secure blockchain scaling for the first time, eliminating hugely expensive signature data from blockspace entirely.

Additionally we are pleased to welcome back Charlie to the EnQlave development team once again. It will be amazing to finally see post-quantum secure wrapped QRL live on ethereum and for the QRL ledger to become multi-chain once again - but this time in a completely PQ-secure manner.

It would be remiss to fail to announce our new intern developer Liam Arzona. Welcome! He will be (and has already begun) working on migrating qrllib from c++ to rust, this will allow for adding threading, async for better performance, and progress of tree building for a nicer UX. 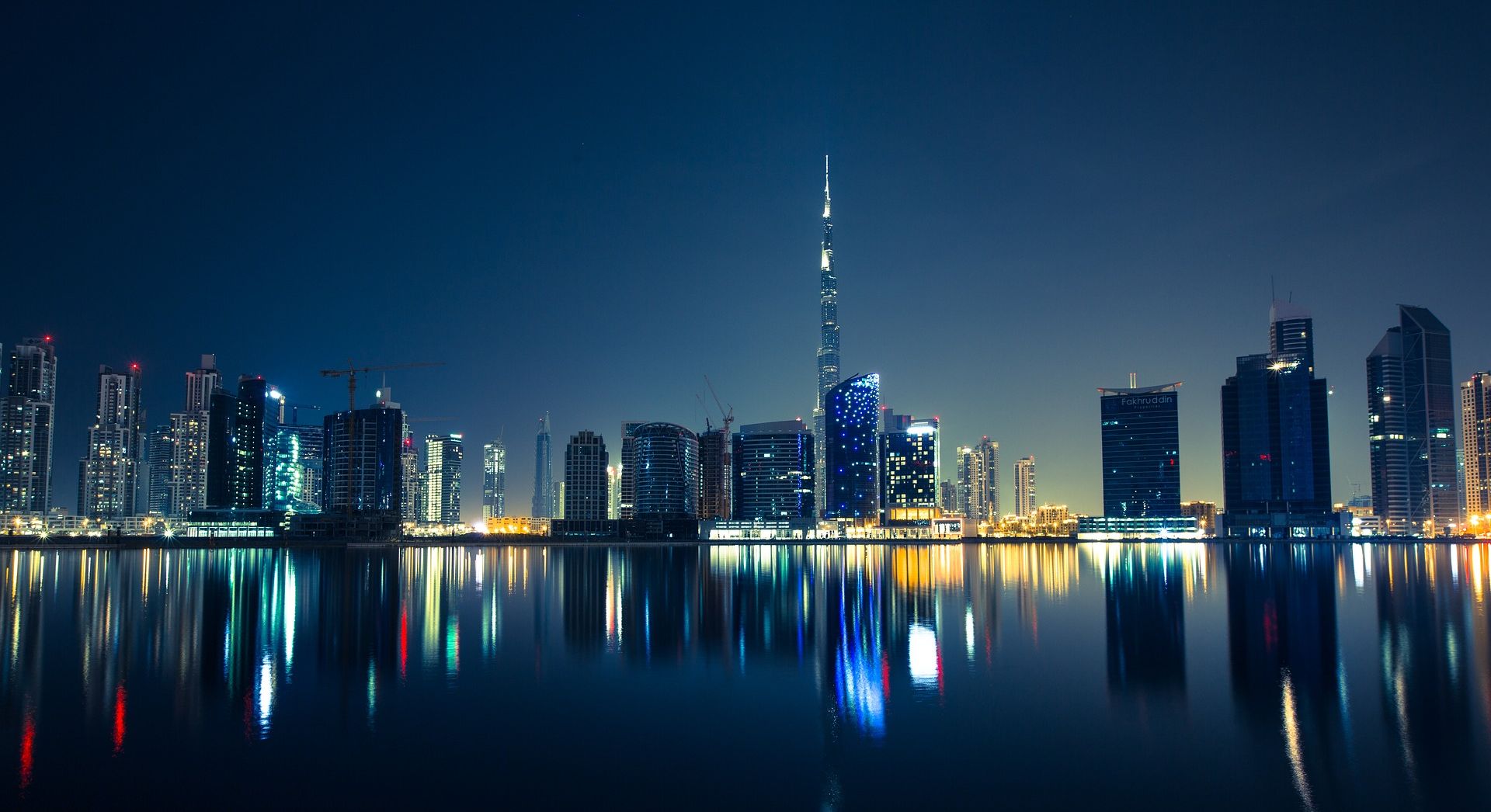 QRL Improvement Proposals (QIPs) been a longstanding part of the process to evolve the QRL core-protocol through a decentralized manner since its first QIP back in 2018. Now, we’ve improved this process through the implementation of on-chain voting.

The main goal of voting is to produce a decision which is accepted by the members of the system (in our case, QRL). One can argue that voting upholds the fundamental principle behind democracy, which is “rule by the people”. In the case of blockchain, it provides a way for stakeholders in the system to have their voices heard to steer how decisions are being made. It’s equally important that there’s enough confidence in results of the raw vote to carry a healthy community and ecosystem through to the fruition of different core-protocol changes.

QRL Improvement Proposal #16 (QIP-016)’s proposition was to reduce the emission rate by a multiplication factor of 0.4x due to “Network and transaction analysis [revealing] that the majority of the network hashrate is made up of ~90% for profit miners, with 60% of that from autoswitching bots.” 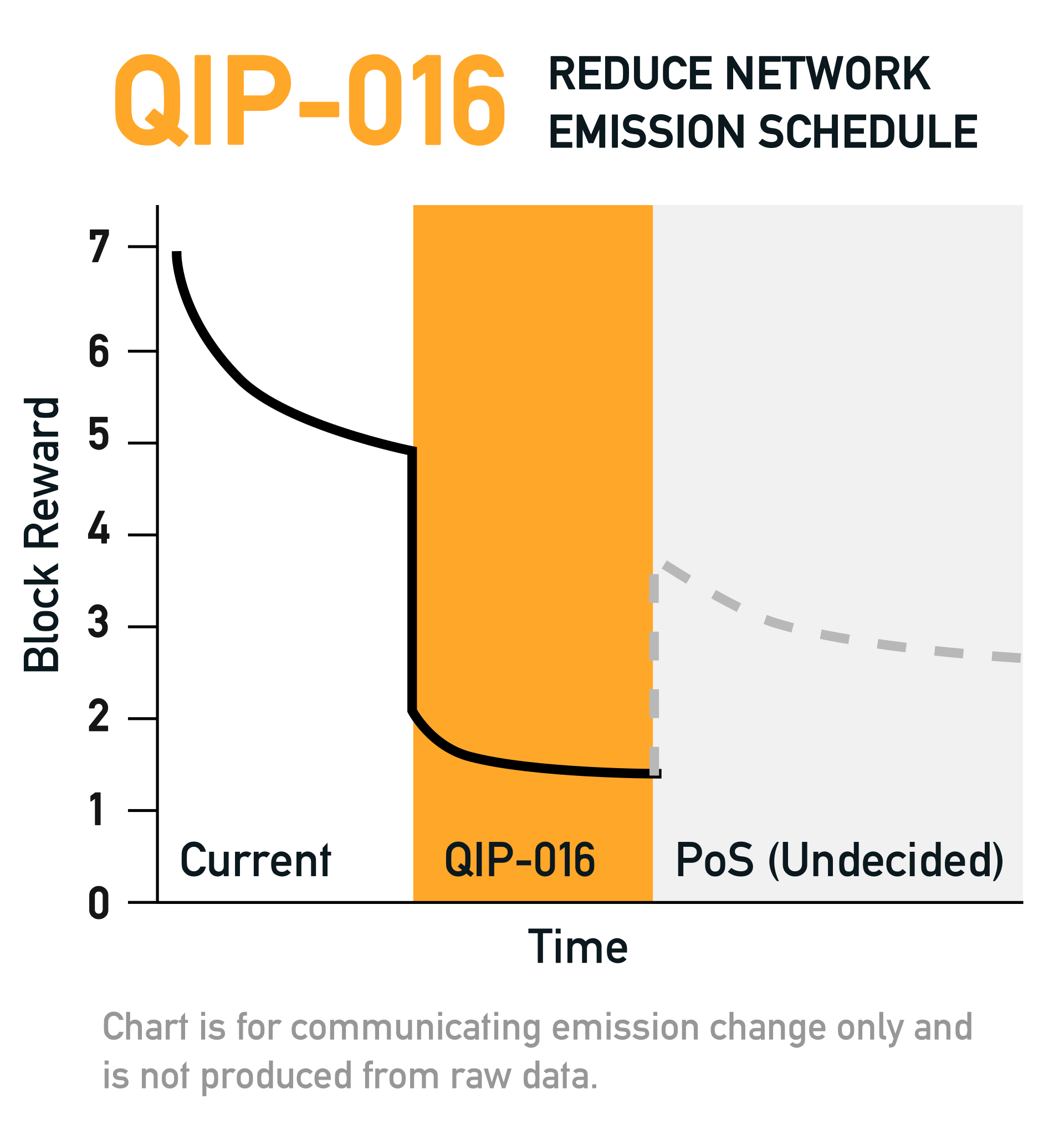 As part of the QIP process, the draft passed through discussion period, garnering 54 comments before being final adjustments and a vote parameter selection. Before the vote, a pre-vote synopsis was formed which outlined the positive and negative considerations for voting.

Finally, the vote started on November 2nd, lasting for two weeks until November 16th, at which point a post-vote determination needed to be made. More on that determination can be read in our final comment on QIP-016. This moved QIP-016 from “proposal->draft” to “proposal->open->in development”.

When we have a better indication of timescales, we’ll be able to give another update as to when, but it should be a few weeks of development time, which has no external dependencies/influences, followed by deployment, and a node upgrade window which needs to be coordinated with key node operators.

Due to needing to coordinate a node update with key node operators (pools, exchanges, etc), that may conflict with staffing holidays, and put the end fork date into early Q1 2022.

IBM quantum broke the 100-qubit processor barrior with their Eagle processor, representing an important milestone in the IBM Quantum Roadmap by “solving challenges across hardware and software to eventually realize a quantum computer capable of solving practical problems in fields from renewable energy to finance and more.”

This processor includes a 3d architecture and readout multiplexing, removing the need for readout electronics for each qubit and thereby reducing the bulk for processors with higher qubit counts, such as their 433 qubit osprey processor slated for 2022, or their 1121 qubit condor processor expected in 2023.

Adding fuel to the fire, QuEra has come out of stealth using Rydberg atoms, with temperatures over a thousand times colder than the superconducting qubits by IBM and Google. and whose conditional gate logic connects through something known as a “Rydberg blockade”.

From QuEra: In Rydberg blockade, laser flashes drive electrons in selected atoms to an outer orbital which causes the parent atoms to briefly “puff up” – but only on the condition that it is not blocked by another puffed up atom. This blockade forms QuEra’s conditional logic gate and can happen in as short of a time period as a few nanoseconds, once again similar to a 1990s Intel CPU.

They’re yet another entrant to the field with a plan for scalable fault-tolerant quantum computers, joining PsiQuantum(Silicon), Google, and IonQ. 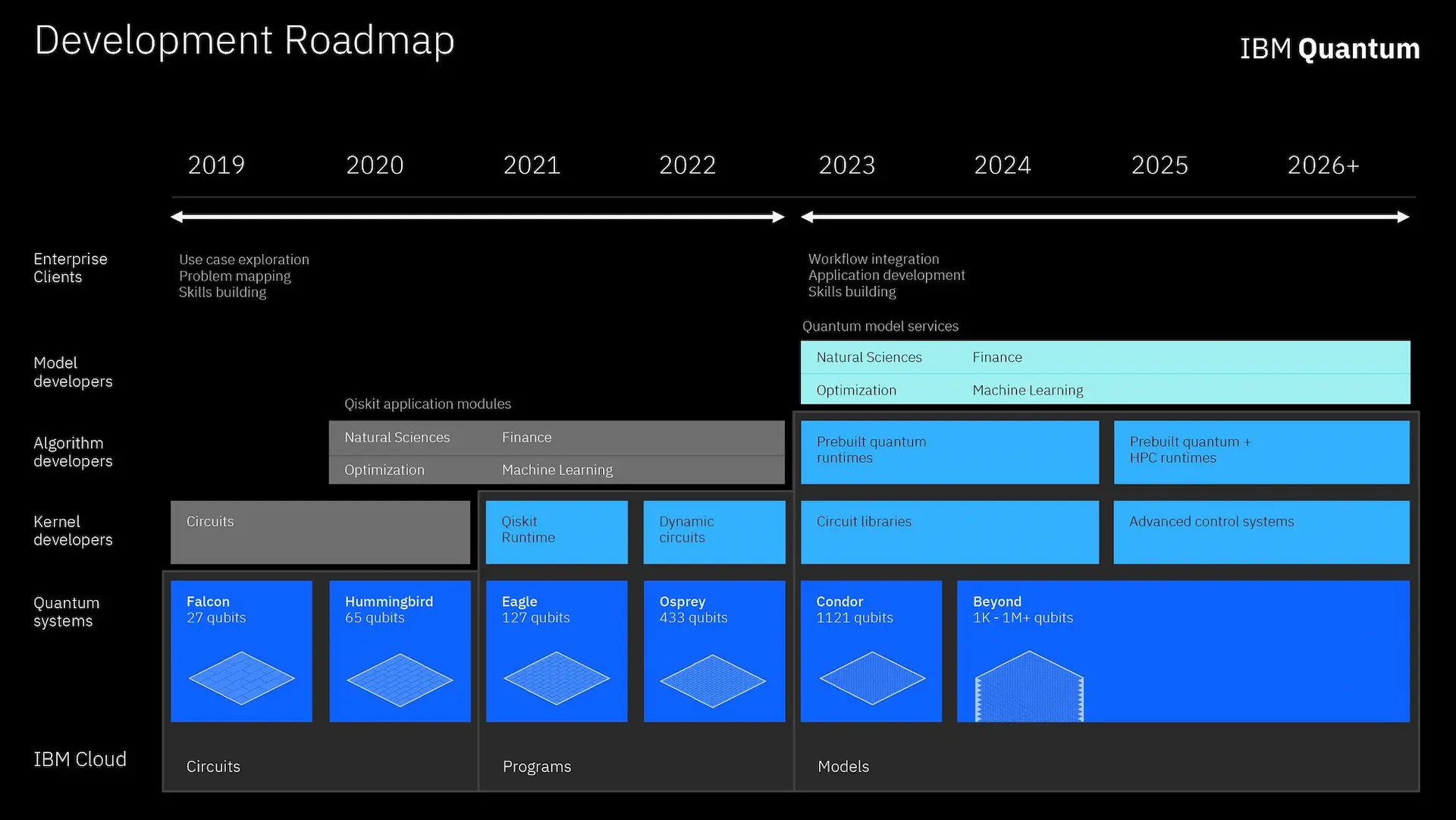 Critically, not all qubits are made equally, and it remains to be seen how well these perform at the end of the day (or year). To try and measure qubits across systems, IonQ has proposed something called Algorithmic Qubits, where as IBM will be measuring using Quantum Volume in conjunction with CLOPS (Circuit Layers Operations Per Second).

The thing that is clear though, is that there is a tremendous amount of money being put into this with a lot at stake. This is noted by Honeywell creating the largest global quantum computer company, Quantinuum, with a majority stake. Their first product is slated to launch in a few weeks (just in time for Christmas?) which promises to be “the first genuine quantum product for use in the real world.”.

If this is true, we could be seeing the beginning of the quantum era, where practical and commercially viable quantum computers start to see some limited use for applications that can’t be reasonably done in polynomial time on classical supercomputers.

James P of p2pq Coffee Trades, has released pre-built QRL Nodes. The node dual boots between Windows 10 and Kubuntu and is currently accepting Fiat or QRL/Quanta for the machines. Exciting to see where this goes!

You can also get QRL sticker packs to disperse into the world (or keep for yourself), which were released last month.

When running cmake, it will fail to on the download step for googletest:

This is due to it trying to fetch the branch “master”, which has been renamed to “main”. This commit updates the repository name so that it will fetch it again.

Googletest was failing to build because the repository changed the primary branch from ‘master’ to ‘main’.

Fixed by changing git tag to reference main instead of master.

PR: 255 - Add maxscrolldepth to GA3 and cnet to ‘featured in’ section

PR: 252 - Adjustments to the future of post-quantum blockchains page.