Development progress at a glance

As we’re approaching our two year anniversary, it’s a good time to take an honest look back at what we said we’d accomplish to what we have accomplished. Between Genesis and the Bromine hard-fork, we delivered on 13 different core features and 6 ecosystem features. Of the 3 that were deferred, we’re at various stages of two of them and are committed to the completion of all*.* 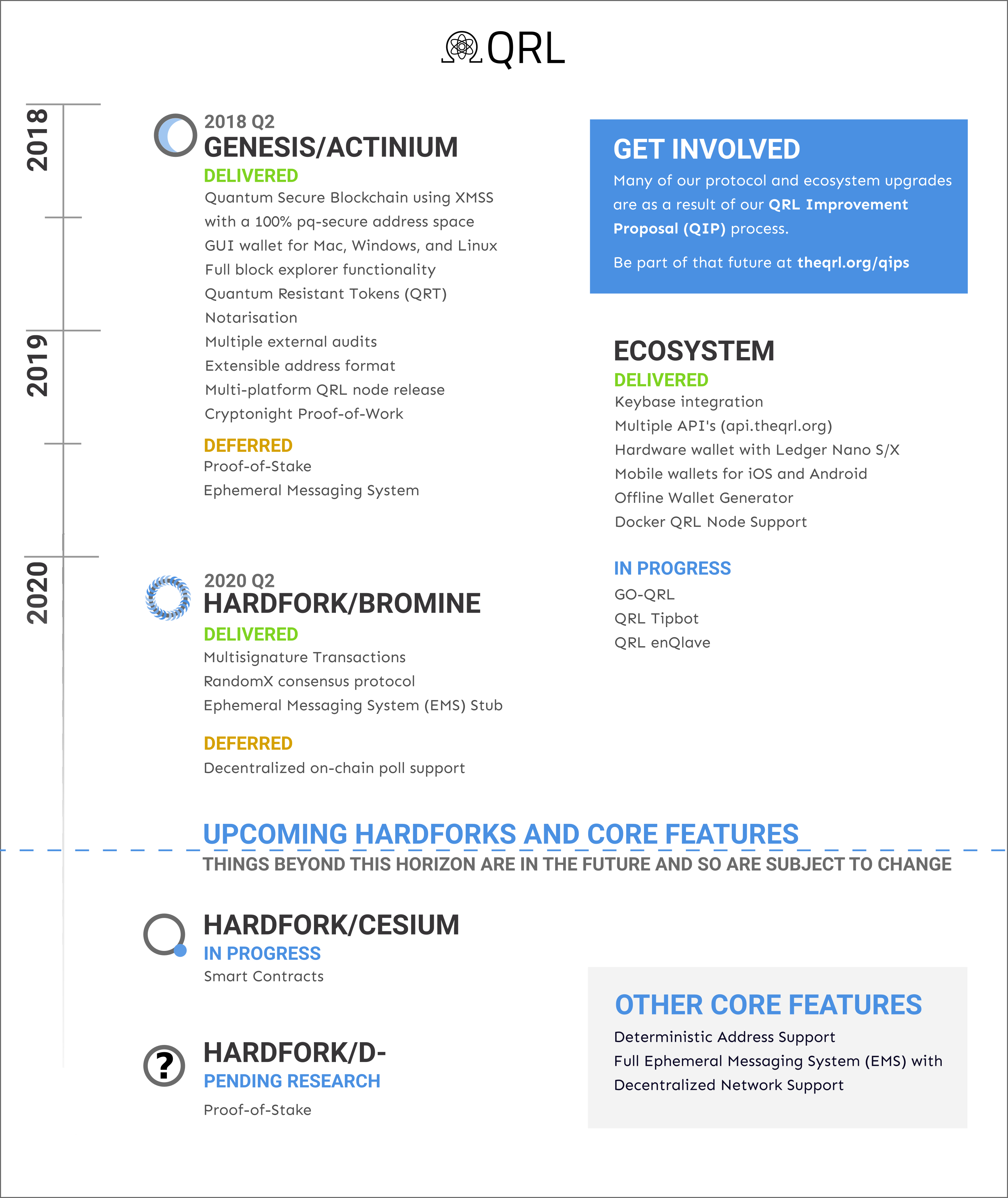 What we deferred, and where we’re at with each

EnQlave: The Quantum Safe for your Crypto Assets

If you didn’t catch it already, you can read an introduction to enQlave by Peter Waterland or get more in depth with Bringing Post-Quantum Security to Ethereum by Charlie Thompson who summarizes it well with: QRL enQlave will bring the post-quantum security of XMSS (eXtended Merkle Signature Scheme) to mainnet Ethereum, and eventually to any other blockchain platform with sufficiently expressive smart contract capabilities.

Beyond bringing the ability for any of the almost 100 million ethereum unique addresses representing 31 billion in value in ETH alone post-quantum security, enQlave has the possibility to bring post-quantum security to the users of platforms such as Tezos and eosio with enough interest and sufficiently expressive smart-contract capabilities.

Right now there’s a working interface which allows you to sign transactions, add and replace any number of keys, and create Ethereum Quantum Resistant Tokens (eQRT).

The smart contract is just going through some final touches and is getting closer to a final review, which will be followed with an audit.

Release can be found on github — it’s not a required update but it does give some special functionality!

This will give anyone immediate URL address resolution to QRL’s PublicAPI without having to install, run and maintain separate server components.

Previously, by default, you’d have access to just the QRL node API, which is fine when you’re interfacing through terminal, but isn’t helpful when creating applications as it’s not as expressive and encourages the use of your languages exec functions, something that, depending on the language, can be more difficult to keep safe.

If you installed docker, this would be similar, but you’d need to get the IP address of your container.

The QRL-CLI has gone from v1.4.5 → 1.7.1 and added refinements, especially to our Ephemeral Messaging System (EMS) system.

Hidden within the enQlave announcement(s) is that we’ve been working on bringing OCAML smart contracts to the Quantum Resistant Ledger (QRL) platform for the next hardfork, Cesium.

[OCAML] is used in environments where a single mistake can cost millions and speed matters. … It’s a safe language. Programs are verified by the compiler before they can be executed, which rules out many programming errors, such as, for instance, confusing an integer for a pointer, or accessing a nonexistent field in a record.

Whilst currently an extremely low risk vulnerability, replay attack protection should ideally be considered and implemented in the next hard fork to completely mitigate this attack vector.

The attack scenario involves a transaction from one blockchain network being relayed to another through a malicious node. This is something possible between QRL Testnet and QRL Mainnet, however, it is not recommended to use the same QRL XMSS account on both testnet and mainnet due to the potential risk of OTS re-use.

Where this becomes more pertinent is when there’s an increase of multiple existing chains persisting where people are more likely to either confuse what chain they’re on, or be inclined to switch between chains and reuse accounts. The chance of such a scenario happening will increase as more interest is accumulated and with certain forking events, such as the switch from proof-of-work to proof-of-stake.

Some proposed solutions in the QIP are:

network ID — A unique numerical identifier, nodes on each network would find any transaction not using the correct identifier invalid. An example would be '0000' = devnet, '0001' = testnet, '0002' = mainnet, '0003' = mainnet pos, or simply stamping the genesis block hash into each transaction. Note this does not prevent replay attacks in later forks of a network using the same identifier.

block hash — each block in the chain has a unique hash value obtained from aggregating and hashing the block header (and incorporating the previous block header hash). Thus, stamping each transaction with the a recent 32 byte block header hash is a simple way of preventing a replay attack. The significant downside is this requires the transaction signer to know something about the current QRL chain which could be a problem for offline transaction signing. Another consideration is that choosing the most recent block could lead to a transaction entering the mempool only for the block to be discarded in a mini-fork and then the transaction become invalid. It would make sense then to choose a block hash at a given depth from the tip of the chain or specific epoch blocks at 1k intervals (or something suitable).

While this subject has been previously discussed at length by the core development team, we would like to thank red4sec (who performed one of our audits) for reminding us.

QIP012’s overview and discussion can be found on github.