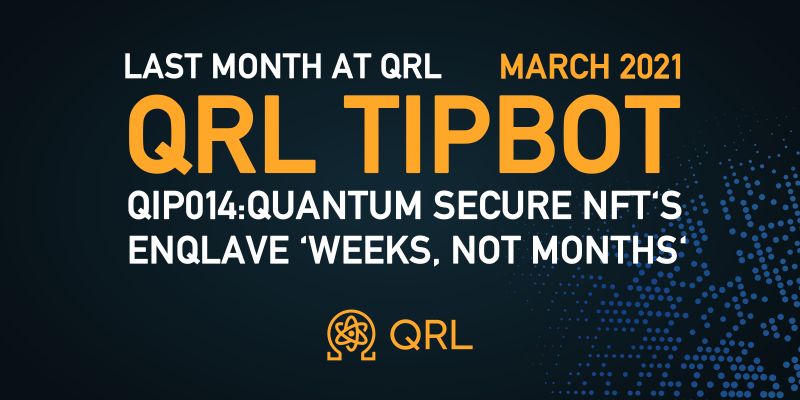 After many long nights, lots of coffee, and countless rounds of testing by the QRL contributors, the Tipbot has been released to the QRL Discord (with more platforms on their way!)

The Tipbot’s main goal is to foster a positive and rewarding atmosphere that supports those who contribute to the project, whether that’s through a tweet, artwork (are meme’s art?), or knocking out a few issues on GitHub from one of our countless repositories.

Along with full on-chain tipping functionality (as it should be), there’s also a faucet, which allows anyone to withdraw from once a day.

Want to get started? Be sure to read more QRL Tipbot introduction blog, or head straight to our Discord’s #bot channel and create a wallet with the +add command.

As a refresher, QRL Improvement Proposal’s (QIP’s) have been how we’ve made several improvements to QRL in the past and will remain as an important part of our governance in the future. Outside of our communities, it’s the most tangible way to contribute your thoughts and ideas to move QRL forward.

What probably doesn’t need a refresher is Non-fungible Tokens (NFT)’s, which has made the headlines recently with artwork going for as much as $69.3 million.

NFT’s are unique in that they’re unique tokens that can’t be broken apart. This makes it suitable for a wide range of applications such as collectibles, games, art, and of particular value, other real-world assets.

To enable QRL NFT support on the QRL blockchain with a soft-fork (no node changes required), the QRL’s Quantum Resistant Token (QRT) TOKEN_CREATE_TX transaction subtype could be supplied with custom data which includes encoding.

This would require changes to the QRL Wallet and Explorer functionality and allow users and third-parties to build functionality into QRL immediately, with low fees and minimal network congestion.

Work on enQlave continued untempered with us entering into the final stretch (finally).

As Ethereum transaction fees are still high we’ve enabled a secondary mode using hashchains and a timelock commit reveal scheme which is seeded through the BIP36 root.

Last month consisted of implementing & testing the storage of commit & reveal enQlave transactions into MongoDB, with reorg revert support functions. The hashchain library was also rewritten as a recyclable class with a swappable hash function.

With the base elements in place, UI re-work has begun to make things as clear as possible.

At this point not much can be said on this but there’s a blog coming out which will be detailing some of their technical advancements.

How do you Create a Quantum Resistant Wallet? Full QRL Wallet Walkthrough

Quantum computing is now entering the commercial sphere, and given its potential impact on everything from climate change to medical research, no business can afford to ignore it.

March 3rd: The Decade of Quantum Computing Is Upon Us, IBM Exec Says

This week, with a measured quantum volume of 512, Honeywell’s System Model H1 became the highest performing quantum computing system in the world in terms of measured performance.

The heart of any computer, its central processing unit, is built using semiconductor technology, which is capable of putting billions of transistors onto a single chip. Now, researchers from the group of Menno Veldhorst at QuTech, a collaboration between TU Delft and TNO, have shown that this technology can be used to build a two-dimensional array of qubits to function as a quantum processor.

EnQlave — the quantum safe for your crypto assets qips technical