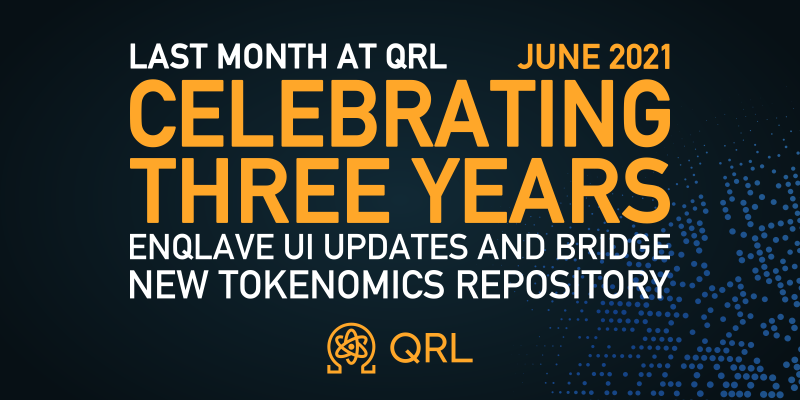 On June 26th 2018, after two years of meticulous development, QRL mainnet was launched. Since then, not only has QRL come a long way, but so has the rest of the quantum computing space.

The pace of progress with quantum computers has been so fast that quantum computing is on the precipice of moving out of its niche. We also believe QRL will follow as QRL moves towards mainstream adoption and looks towards expanding its already high-level tech talent pool development operations out of the UAE.

To celebrate our three year anniversary since mainnet (~5 years since the first commit), we’ve planned out multiple months of events.

For the end of June, we have held ten trivia questions and two puzzles per day. This upcoming month of July, we will be unveiling several different mascots whose styles will needed to be voted on. We expect the voting on each mascot to be open through from Sunday to Friday.

From the mascots that won, we’ll have more created and a mascot meme contest will ensue! Finally later in August, we’ll be holding a mascot merchandise contest!

More about the milestone and event can be found in our Celebrating three years of QRL blog.

The goal of the QRL Tokenomics repository is to provide tools and datasets for end users to evaluate different tokenomics of QRL. This includes macrotokencomics and microtokenomics, but primarily deals with the latter.

Is Bitcoin A Pyramid Scheme?

Is Elon Driving Bitcoin Off A Cliff or Into the Future?

From Scalpels to Qubits: The Story of the World’s First Post Quantum Block Chain

For more than a decade, Peter Waterland diligently pursued his role of a surgeon. At the same time, he began delving into a variety of intellectual activities (so much so that he gained a reputation as a polymath). Among these were cryptography, programming and blockchain technology, all of which propelled him to become a passionate cryptocurrency champion.

Quantum Computing: The Cause of the Next Crypto Crash

New business will offer the world’s highest-performing quantum computer and comprehensive quantum software, including the first and most advanced quantum operating system

IBM researchers have finally proven in a real-world experiment that quantum computers are superior to classical devices – although for now, only at a miniature scale.

“We’ve developed a fundamentally new approach to scaling quantum computers,” says Chad Rigetti, founder and CEO of Rigetti Computing. “Our proprietary innovations in chip design and manufacturing have unlocked what we believe is the fastest path to building the systems needed to run practical applications and error correction.”