2 years ago, QRL mainnet was released on 26 Jun 2018, and has operated a fully provably secure blockchain network not only without incident such as lost funds or a network hiccup, but also with the same capacity of the Bitcoin network.

It can, and has been done, read more in the announcement. 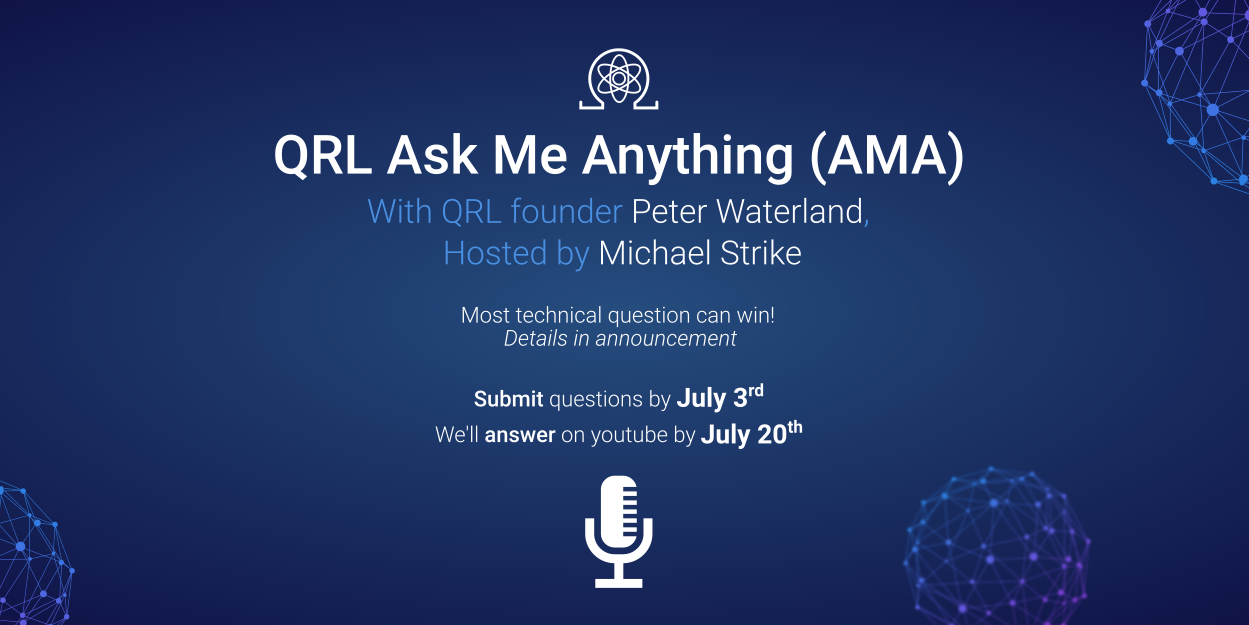 Exactly 1 year ago when this blog lands, we would have had our last Core Contributor AMA, the summary of which can be found in a previous blog post — and we heard you, that’s quite a bit too long between AMA’s.

We also heard that you’d like to hear more from the founder of QRL, Peter Waterland, and we’re combining that with a competition for the most technical QRL related question — stump us!

Be sure to read the announcement for more details.

In search of a full-time in-house marketing person

QRL originally began as an open source cryptocurrency platform to secure digital assets from the quantum threat, but is developing into the world’s premiere post-quantum provably secure ecosystem.

Recent achievements since project inception three and a half years ago were covered in our previous Last Month at QRL.

After community suggestions, followed by a series of internal meetings, we achieved consensus that there is room to improve in expanding our reach and communicating all positive aspects of the project in order to foster increased adoption.

Therefore, we’re happy to announce that we’re looking for a full-time in-house marketing person. A formalized role description is forthcoming.

Until then, if you feel you or someone you may know has what it takes to tackle the cutting edge collision of blockchain and quantum computers on the project that is educating and pioneering steps forward in this space, send an email to jobs@theqrl.org.

We might have another Kaushal Kumar Singh on our hands who we’ve historically speculated might be part machine, part AI, and sometimes opined for a clone. Evidence of our search for clones can be found on our job post looking for golang developers!

Did we get what we want? Is Charlie Thompson a clone, or another person with an insatiable appetite for progress and work ethic that mimics that of a machine?

Work continues on steadily on enQlave with** progress on a spectacular UI** and **lining up auditors** to help ensure **proper security is maintained**. The auditors we spoke to last month have been advised it is a **three week code audit — which should start imminently.**

PoS back on track

Proof-of-Stake is back in session with a devnet barebones coming soon with the aim of this month.

A separate medium blog will outline what to expect with and there’s a lot to say! Some questions from the community which we’ll cover is everything from what the minimum staking amount will be, to the type of PoS and how relevant our old PoS whitepaper is — which we look forward to answering.

If there’s any other questions on PoS, be sure to ask and we’ll make a note cover them.