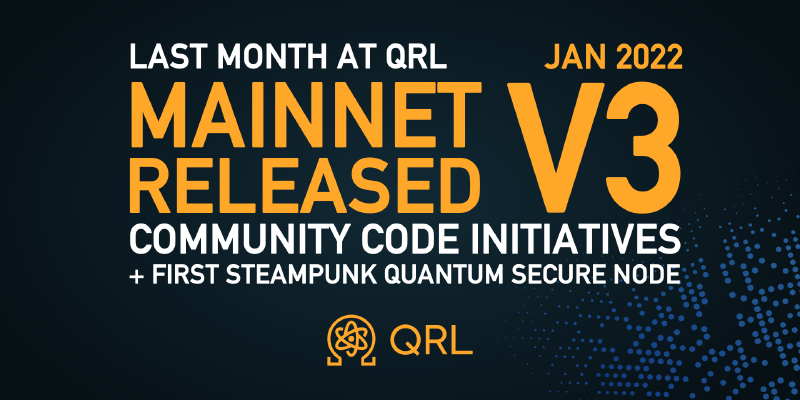 We’re pleased to announced that QRL mainnet version 3 (codenamed Cesium) has been released!

The hard fork implements an emission reduction by a multiplication factor of 0.4x of the per block coinbase reward starting at the hard fork block height of 1,938,000, which has an estimated date time of 2022-02-25 07:30 UTC as of this blog.

Updating is simple, and consists of no API changes so wont break any environments.

You can read more detailed instructions in our mainnet v3 release blog or our recent video guide featuring the construction of a QRL steampunk node!

We often pride ourselves on maintaining a high level of code-transparency with 55 public and open-source (MIT) source repositories (65 total), but this month we’d like to highlight the works of the QRL community, which have contributed 14 repositories to date. The two most recent from January are QRLtoSQLite and zeus-proxy-advanced, which we’re featuring this month.

Other community code initiatives have included:

The QRL Community consists of forward-thinking professionals and amateurs of various backgrounds and ages around the world that strives to create an accessible and open environment for everyone to thrive. Without them, the QRL project would not exist as it is today. With code being the engine that turns gears of a working blockchain and the ecosystem that surrounds it, having a strong community of contributors can ensure that those maintainers who write the code, while individually ephemeral, are collectively eternal. Longevity at its finest.

From the beginning, we’ve always had QRL Improvement Proposals (QIPs), where anyone can form a proposal for core protocol changes. Last year, we made headway with on-chain voting so that the community can better steer the direction of QRL. That lead to the first on-chain vote, which resulted in QRL Mainnet v3.0. We also hosted our first hackathon, which we will be doing more of.

In the coming years, we’ll be taking this further. Many reading may have heard of the QRL Enhancement Program (tentative title) which is under development, and aims to give a broader focus to community driven initiatives which covers more ground. Anything outside of core protocol updates would apply here, including everything from social media campaigns and graphic design, to the internationalisation of content or local meetups. While it’s imperative to do everything right, with the amount of demand from the community that wants to hit the ground running, we’re looking at a way we can have an intermediate solution, so stay tuned!

Have a development project that’s not included in The QRL Community GitHub organisation? Get in touch with a team member in Discord, and we’ll be able to add it either as a mirror or as a source.

The QRL blockchain uses LevelDB to store its information. While a very capable key value store database with a focus on performance, it’s not one that’s readily accessible for those wanting to analyze the QRL blockchain or us it in other programs that may be more suitable with a RDMS.

The QRLtoSQLite repository by 0xFF0 (@0xFF in Discord) provides tooling to create an SQLite database from the data directory of a QRL node and includes the occasional snapshot of a database accessible directly from the GitHub repo.

Zeus-proxy-advanced from successor1 (@runforest in Discord) is a tool inspired from zeus-proxy(different code base) for developers to use GRPC functions via a REST API.

It’s also meant for users, who can use it as a testnet faucet for the QRL Blockchain over at quantafaucet.xyz

Michael Strike from the core QRL team walks us through the creation of a fully functioning steampunk themed QRL node as well as upgrading the node to the latest mainnet release v3.0 (codnamed Cesium).

You’ll be in Michaels capable hands as he goes over why you’d want to update your QRL node, including Areas covered:

“What we’re focused on really is figuring out a strategy for how to scale a quantum computer,” CEO John Levy told me recently on the TechFirst podcast. “As much as IBM will get to a thousand or thousands of qubits … the question is how do we get to ten thousand, a hundred thousand, a million qubits so that we actually scale quantum computers to the complexity of the problems that large companies care about.”

“And that’s what we’re doing.”

A new method for quantum computing

Physicists from the University of Amsterdam have proposed a new architecture for a scalable quantum computer. Making use of the collective motion of the constituent particles, they were able to construct new building blocks for quantum computing that pose fewer technical difficulties than current state-of-the art methods.

What is the quantum apocalypse and should we be scared?

Imagine a world where encrypted, secret files are suddenly cracked open - something known as “the quantum apocalypse”. … Seriously? That does sound completely apocalyptic, so why haven’t we heard more about this?

The answer is that yes, OK, this would indeed be the case if no precautions were being taken. “If we weren’t doing anything to combat it then bad things would happen,” says a Whitehall official who asked not to be named.

In practice, mitigation efforts are already in train and have been for some years. In the UK, all government data classified as “top secret” is already “post-quantum” - that is, using new forms of encryption which researchers hope will be quantum-proof.

Fixes issue with MS address not in state

Even testnet and mainnet code

Move QIP016 from “in development” to “awaiting hardfork”

Automatically use software AES when hardware AES is not supported