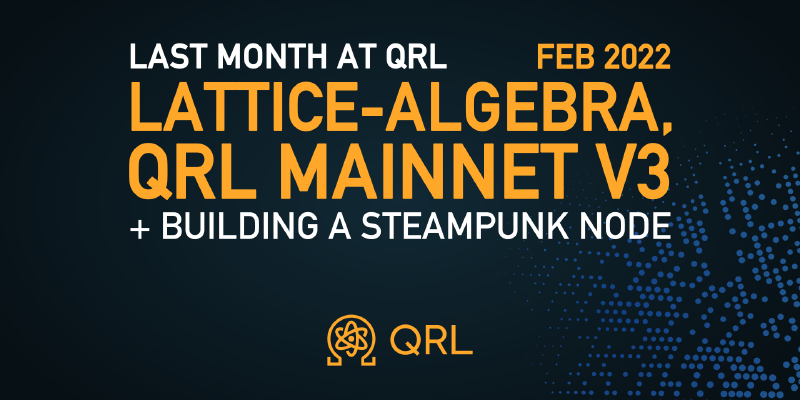 Presently, the Quantum Resistant Ledger (QRL) is a pioneering layer-1 blockchain protocol and decentralized communication layer. With long-term sustainability as a core value, QRL will be moving from Proof-of-Work to Proof-of-Stake along with capable smart-contracts, ensuring a long and safe future for the world’s transactional data.

While we’ve made our Proof-of-Stake codebase “project Zond” public, we’re committed to not just succeeding on implementing Proof-of-Stake, but to do so with improved efficiency. This has required additional fundamental research around improving several critical crypto-systems, such as signature aggregation.

With that in mind, The QRL Foundation partnered with Geometry Labs, who are now pleased to announce “lattice-algebra”, an elegant, high-performance, cryptographic library on GitHub for use in blockchain systems integrating post-quantum security. This “lattice-algebra” library will be used to prototype a variety of new features for the Quantum Resistant Ledger (QRL) protocol, such as lattice-based Proof-of-Stake signatures, trustless cross-chain atomic swaps (QRL↔BTC, QRL↔ETH, etc), and “lightning network” style payment channels.

More can be read on our Introducing lattice-algebra blog.

We’re pleased to announced that the QRL Mainnet Version 3 (codenamed Cesium) hard fork has been successful!

More can be read about in our release blog

As there’s no proper way to do in-memory eslint-ing of JSON, the QRL NFT Microlinter was created to temporarily write to a file which is linted and cleaned up. Also now integrated into a dev version of the wallet.

Repository can be found at https://github.com/theQRL/qrl-nft-microlinter

The providers repo is used by services within the QRL ecosystem (eg. wallet, explorer) to identify NFT providers utilizing the QRL blockchain.

Tired of waiting for your node to sync?

The QRL blockchain is a public ledger of all transactions that have ever been executed. It is constantly growing as ‘completed’ blocks are added to it with a new set of recordings. There’s been some initiatives such as qrl.co.in that saves a bootstrap file, but this requires stopping the node, backing that up, before resuming the node again. This is an old practice done to prevent corrupt backups. Discord user 0xFF found a way to save QRL’s blockchain data in a stable way while QRL node is running.

It’s now more easy to create bootstrap files and share it to help the community.

Michael Strike from the core QRL team gives us a full walkthrough of the custom node he’s built. Not only is it creative and functioning, but it’s also the the world’s 1st steampunk Quantum Computer Resistant blockchain node.

The Race to Build a Fault-Tolerant Superconducting Quantum Computer

Quantum computers are theoretically far more powerful than classical computers on important tasks such as investigating novel battery designs or discovering new drugs, but they are currently too error prone for practical use. Now Amazon, Google, IBM, and others are pursuing a bevy of innovative strategies to develop fault-tolerant quantum computers based on superconducting circuits. - IEEE

Of the technologies tested, only the Quantinuum System Model H1-1, Powered by Honeywell, outperformed the classical results. Dalla Torre said classical computers return the correct answer only 87.5 percent of the time. The H1-1 returned the correct answer 97 percent of the time. (The team also tested the game on the now-retired System Model H0, which achieved 85 percent.) - scitechdaily