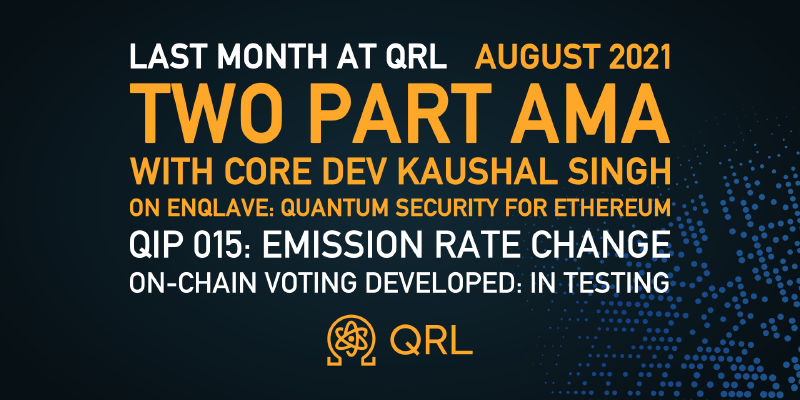 Michael Strike and Ryan Malinowski sat down with our core blockchain developer Kaushal Kumar Singh over a two part AMA spanning one and a half hours to talk about EnQlave, which will bring Quantum Security to the Ethereum blockchain, the UAE expansion, and more.

Some notable highlights were:

Currently in draft, QIP 015 suggests an emission rate change to be cut by 90%

The reasoning is that a significant portion of miners currently mining on the QRL network ends up selling their QRL on the network. By reducing the rate of emissions, the overall value of QRL could start to rise, which can result in everything from a higher marketcap ranking to a positive feedback loop.

The draft stage is a great time to get your feedback and will be used to structure the improvement into a proposal that will be voted on.

Have thoughts on the topic? Give your feedback on the QIP directly. Want to hash it out more informally first? We have a thread in our Discord as well.

The ContractListener has been refactored to be more fault-tolerant and handle race conditions during chain re-organisations.

API’s were also rewritten to migrate the code from Infura to our own custom Ethereum Node for better stability and handling under a wider variety of network conditions.

Note: We previously were calling wrapped QRL eQRT’s, but in order to reduce confusion, we’re changing that to wQRL going forward, as it functions in a similar way to wBTC. Also explained by Michael Strike in the above video to the AMA question “Why was the name changed to wQRL, instead of eQRL?”.

In order to properly govern QRL Improvement Proposals (QIPS), as well as for anything else where on-chain governance is desired, we’ve developed and will be releasing on-chain voting.

It works by first taking a snapshot of the blockchain at a certain blockheight and then creating and distributing a token in a 1 to 1 proportion to the funds in the QRL wallet. There is then two or more addresses that represent the voting outcomes where people can send their funds to.

Further testing, documentation and supported tooling is still left to be worked on before a wider release.

The QRL Improvement Proposals (QIPs) is the formal process to change things related to the QRL core protocol along with other layers that effects most or all QRL technical implementations.

It covers the following layers

The QRL Improvment Proposal (QIP) refresh is designed to address those issues and more through:

Right now this is complete but will be going through review and further discussions before a PR is issued.

For proposals that don’t effect most or all of QRL technical implementations, such as client implementations (eg. wallets, explorers), as well as non-technical related proposals (design, advocacy), but where consensus is required, there is a QRL Enhancement Program (QEP) being developed as well.

Google’s time crystal discovery is so big, we can’t fully comprehend it

“Forget Google Search and Fuchsia. Researchers from Google, Stanford, Princeton, and other universities might have made a computer discovery so big we can’t fully comprehend it yet […] But if it turns out to be accurate, then Google might be one of the first companies to give the world a crucial technological advancement for the future. Time crystals will be an essential building block in quantum computers, the kind of computers that can solve complex problems with incredible speed and power technologies that aren’t even invented.” - bgr

“Researchers in Japan have made a discovery that could unlock opportunities to combine classical and quantum computing technologies in new ways, resulting in a massive boost in processing power.” - techrader

A complete platform for quantum computing

“In a new groundbreaking work, researchers from DTU have now realized the complete platform for an optical quantum computer. The platform is universal and scalable, it all takes place at room temperature, and the technology is directly compatible with standard fiber optic networks. This puts DTU right at the forefront of the development.” - phys.org

“Current noisy, intermediate scale quantum computers have between 50 and 100 qubits, lose their “quantumness” quickly, and lack error correction, which requires more qubits.” … “We found we could turn all the problems of interest into optimization problems, potentially with quantum advantage, meaning the quantum computer beats a classical computer at the task” - phys.org

“UNSW Sydney’s quantum engineers have removed the major obstacles that have hindered the realization of quantum computers. They have discovered a new technology that they say can control millions of spin qubits” … “The team then plans to use this new technology to simplify the design of short-term silicon quantum processors.” - illinoisnewstoday