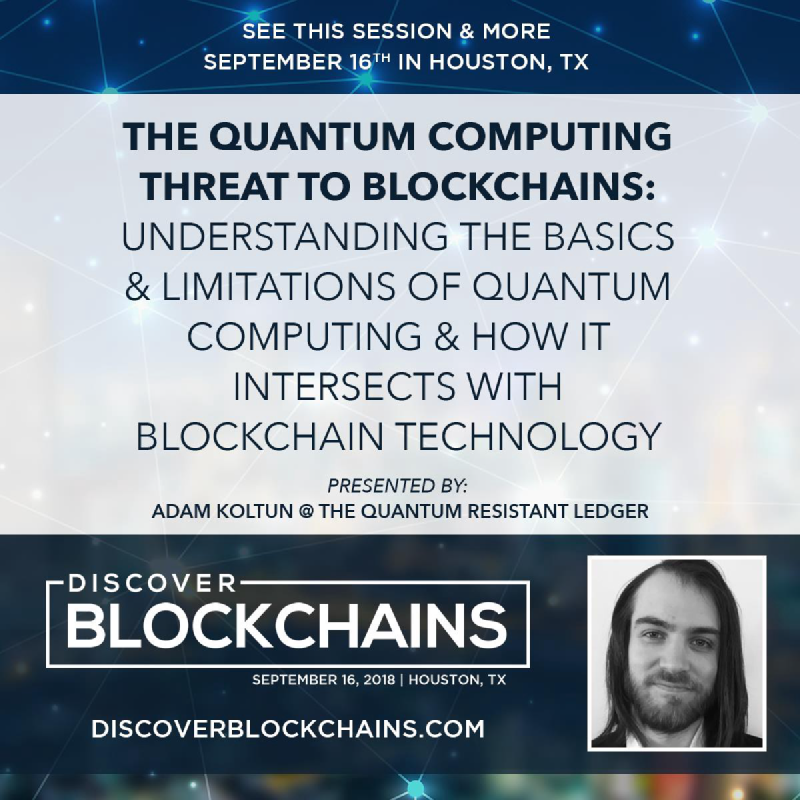 Discover Blockchains 2018 will be attended by:

Discover Blockchains is a conference that is, like the name implies, meant to introduce new people to the blockchain industry, as well as show people already interested in blockchain something they have not seen before. I will have an opportunity to speak at the conference, and I will try to tailor my talk (as I always do) to the particular audience in attendance.

Given how often I still meet people when giving talks who come up to me afterwards to tell me that they did not know quantum computing was even possible, let alone being actively developed, I think I will be able to introduce the crowd to some new ideas. QRL is not sponsoring this conference so if you are planning to attend, we will not have a booth.

My talk will be at 3:00pm in the Imperial East room

As I have stated in such blogs previously, one of the nice things about blockchain conferences is that they are not all the same. To be blunt, were this conference not in the United States, I doubt I would have been able to attend. However, given that adoption and education are still two of the largest barriers facing cryptocurrency in general, and QRL in particular, I am very glad to be able to take this opportunity to hopefully educate the audience about not only quantum computing and blockchain, but what QRL is doing about it.

Secondarily, it is nice to not have to lose days of travel to attend a conference, as by the end of my Spring gauntlet of speaking engagements, I realized I had lost altogether too much time in airports, on airplanes, and recovering from those two experiences.

As always, if you will be in attendance and would like to meet up for a chat, feel free to message me on Discord, Twitter, or send me an email.