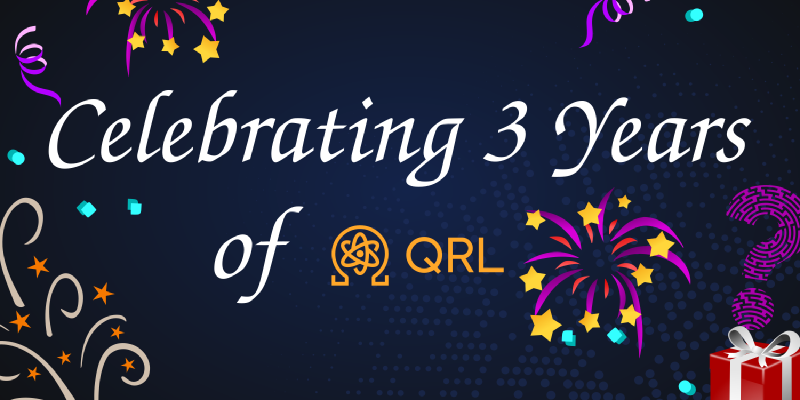 Starting from block 0 (genesis) to today

On June 26th 2018, after two years of meticulous development, we launched QRL, the first batteries-included quantum secure enterprise-grade blockchain backed by the stateful signature scheme XMSS, as opposed to ECDSA found in many blockchains including Bitcoin and Ethereum. From the beginning we have been passionate about driving the solutions to prepare for the next revolution by delivering a first-of-its-kind, post-quantum value store and decentralized communication layer that proactively tackled the threat advanced quantum computers pose to cryptocurrencies.

As visionaries, we had the foresight to use XMSS which is currently a NIST recommendation. As security professionals, we refuse to release untested products, only releasing after a multi-year testnet and multiple external audits, one of which we chose to extend and invariably pushed our launch date out.

This was with a full ecosystem:

Over the years, we’ve continued to improve upon our network by adding things like an offline wallet generator, Mobile wallets for iOS along with Android, and Hardware wallet support with the Ledger Nano S/X.

Other things we improved upon were:

In the years ahead

Not settled on just securing QRL, we’ll be launching EnQlave, which will secure Ethereum wallets and assets from quantum attacks and can be expanded to other platforms with sufficient enough smart contract capabilities in the future. EnQlave also unlocks global access to liquidity on decentralized exchanges (DEX’s) like Uniswap, which are increasingly dominating the volume against centralized exchanges (CEX’s).

On the research and development front we also have a partnership with Geometry Labs working on Proof-of-Stake (which is currently in devnet), with a blog coming on that which outlines a few paths forward on the front of cross-chain atomic swaps (BTC <> QRL) to efficiency upgrades.

Other things on the horizon are smart-contracts, golang, and fully realizing a fully decentralized and resilient quantum secure messaging layer.

In late 2019, google was the first hit quantum supremacy, a benchmark indicating that quantum computers reached the point that they can run faster than a supercomputer at an artificial task that’s not very useful other than demonstrating quantum supremacy.

2020: Quantum computing is now available on AWS through Amazon Braket

Covered in our May Last Month at QRL blog, PsiQuantum, the leading quantum computing company focused on delivering the first useful quantum computer, and Globalfoundries, one of the three tier-one semiconductor manufacturing company, announced a partnership after four years of quiet collaboration to build the world’s first full-scale commercial quantum computer, known as Q1, which aims to deliver a commercially viable quantum computer with one million qubits by 2030

We’re going to kick things off with daily trivia and puzzles until the end of June, so get on your thinking caps and start browsing our github, documentation, whitepaper, and past blogs.

Next up is a month of mascots and memes featuring the Squirrel, Quokka, Black swan, and Tardigrade.

Each mascot will be pitted against each other through votes in the mascot battle of the century! Who will win, or will unlikely partnerships prevail? Voting will be done on Reddit, Twitter, and Discord.

With the winners (or those that didn’t make the cut!), we’ll be running a mascot meme contest.

We already have different merchandise, this is an expansion that adds people’s favourite mascots to the mix.

The top 3 winners can win their own merchandise or the merchandise of someone else (up to $100 each), and previous top participants of the trivia, puzzles, mascot meme contests will end up with merchandise of their choice (also up to $100 USD).

A big thank you to the community

None of this would be worth celebrating without our bright and dedicated community, contributors, and moderators making for a welcoming space for those with diverse opinions.

These amazing people can be found through out our community channels on Telegram, Discord, Reddit, Facebook, and KakaoTalk.